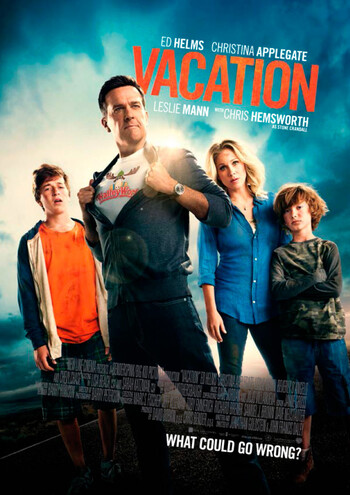 This is not your father's Vacation.
(Nor his father's, for that matter.)
James: I've never even heard of the original vacation.
Rusty: Doesn't matter, the new vacation will stand on its own, okay?
Advertisement:

It serves as both a reboot and sequel to the National Lampoon's Vacation series, following the escapades of Rusty Griswold instead of his father Clark, though maintaining the same format and featuring supporting appearances by Chevy Chase, Beverly D'Angelo, and Leslie Mann as Clark, Ellen, and Audrey Griswold respectively.

Now all grown up and with a family of his own, Rusty (Helms) plans a cross-country car trip to Walley World in the hopes of reconnecting with his wife, Debbie (Applegate), and bonding with his two sons, James (Skyler Gisondo) and Kevin (Steele Stebbins). But typically of every Griswold family outing, disaster — and hilarity — soon ensue.

The film also features many celebrity roles and cameos, with appearances from people such as Chris Hemsworth, Charlie Day, Ron Livingston, Norman Reedus and Keegan-Michael Key.

This was the first entry to be released since the death of creator John Hughes in 2009.

You can watch trailers 1

, as well as the red band trailer