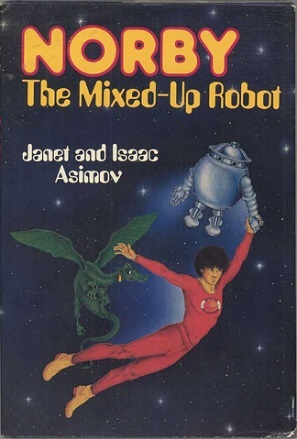 First published by Janet Asimov and Isaac Asimov in 1983, this Science Fiction Adventure story is the first tale in The Norby Chronicles.

Agent Two Gridlow and Cadet Jefferson Wells are in the office of Admiral Yobo, head of Space Command, the military branch of the Solar Federation. Jeff is in trouble ("You are trouble") because he's disabled the kitchen computers by accident ("Accident? Hah!"). His older brother and only surviving family member Fargo is called in to arrange for his temporary dismissal from Space Academy. Admiral Yobo kindly gives him enough money for a teaching robot, but insists that he stay on Earth for the summer.

So Jeff picks up a used robot and names him Norby. While Jeff and Norby are discovering the unusual abilities built into him, they're also attacked by minions of Ing the Ingrate, a terrorist leader who wishes to become Emperor of the solar system. While avoiding capture, Jeff and Norby discover a built-in hyperdrive, Touch Telepathy, and that Norby is a bit mixed-up. Together with their friends and newfound powers, they stop Ing and reveal his true identity.

Norby, the Mixed-Up Robot contains examples of the following tropes: