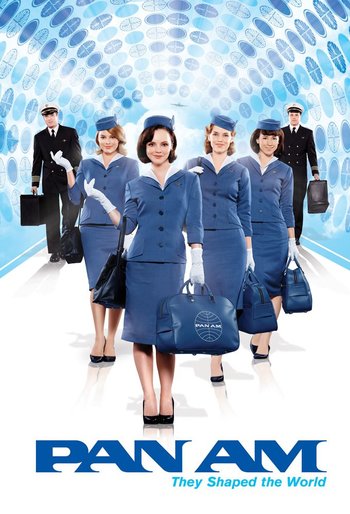 "Come fly with me, come fly, let's fly away..."
Advertisement:

Pan Am was a television series which aired on ABC in the USA. It focuses on four Pan Am stewardesses; Maggie Ryan (Christina Ricci), sisters Kate (Kelli Garner) and Laura Cameron (Margot Robbie), and Colette Valois (Karine Vanasse); and their two regular pilots, Dean Lowery (Mike Vogel) and Ted Vanderway (Michael Mosley), during the airline's height of popularity in the 1960s. Expect lots and lots of Tropes on a Plane.

Dueling Shows with NBC's The Playboy Club and both attempting to capture the success of Mad Men for primetime broadcast television. Neither attempt worked, though Pam Am barely "won" the duel by lasting a whole season before being quietly canceled. It is arguably best known for introducing audiences outside Australia to Margot Robbie (those who hadn't seen her on Neighbours, anyway). Originally ran from September 25, 2011 to February 19, 2012.

Had more success overseas, to the point Amazon was interested in a second season (which did not go through).

Tropes found in Pan Am: