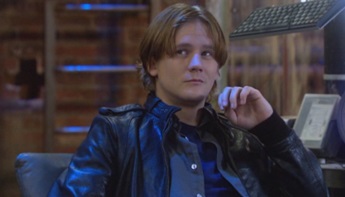 This guy's always been part of Torchwood Three. You just haven't looked hard enough.
Jack: Adam, I know how much you love audits. It's gotta be done. If you could...
Adam: Go through the reports, find out when they came through the rift.
Jack: OK with that?
Adam: I have been for the last three years.
— Jack can't sort out his real memories from the fake ones Adam bestowed on him
Advertisement:

The team has an uneventful day as Gwen, Ianto, Jack, Owen, Toshiko, and Adam pass their time in the Hub.

There's a new guy in the opening sequence, and his name is Adam. This handsome villain's main power is to make everyone around him Remember the New Guy?. He can also change their personalities, and turns Torchwood into a self-insert fanfic: Jack becomes his new best friend, Toshiko his sexy, snarky girlfriend, and Owen becomes a nervous, mousey office dork with a crush on Tosh. (Ianto just sort of hangs back.) Gwen arrives for work, sees the stranger, and asks, "Who the hell is this?" But then Adam touches her and feeds himself into her memories, covering the remark by making it an in-joke about what Adam said on Gwen's first day.

By implanting new memories, Adam sometimes also buries old ones as a side-effect, and Gwen forgets ever having met Rhys. This instantly backfires on Adam, because, you know, Gwen lives with Rhys. The team quickly figure out that something's very wrong when Gwen calls to say there's a half-naked burglar in her house and they arrive to find her holding her fiancé at gunpoint. Gwen thinks Rhys is a crazy stalker who's put up fake photos of them together. Rhys accuses Jack of retconning Gwen because he wants her all to himself, and Jack promises to find out what's going on.

Adam convinces Jack to share his deepest trauma after making him remember that Adam is his Confidant. It turns out that Jack has one memory deliberately hidden away: that of accidentally losing track of his little brother Gray during an air raid on his planet by "the worst possible creatures you can imagine". His memories of his home, the coast of the Boeshane Peninsula, are too painful for him.

While Gwen tries to fall in love with Rhys all over again and re-trigger her memories of him (and happily succeeds!), Ianto reads through his Torchwood diary and realizes Adam isn't in it. Also, his blood sample isn't in the Hub database. Adam knows that he's been rumbled, so he undoes Ianto's recollection of the discovery and tries to eliminate him as a threat by filling his memories with gruesome murders (and kisses him, because that's just how things are in Torchwood), so Ianto becomes convinced that he's an insane Serial Killer and confesses to Jack. Jack, of course, doesn't believe that his boyfriend would suddenly go insane, and he completely thwarts Adam's plans by...

... just checking the security cameras and seeing him do it to Ianto. Seriously. Least prepared villain ever.

Adam's locked in the vault while Tosh has a breakdown over losing her boyfriend like that. Jack holds an improvised hynotherapy session to make everyone remember their true selves. Tosh's true self likes maths and didn't have a flat-warming because there was no one to invite. Owen's true self had a cold, distant mom. Ianto's true self just wants to be loved by his co-workers. Gwen's true self loves Rhys... but not in the way she loves Jack. With that out of the way, they all take amnesia pills and fall asleep and the files and footage from the past two days are purged so that Adam will be erased.

Jack confronts Adam in the cells. Adam admits that he's a being who escaped from the Void and exists by inserting himself into others' memories, and that he was drawn to Torchwood because they had the most interesting memories. He argues that he didn't harm the Torchwood gang: he made them better, he claims, echoing every fanfiction writer out there. He gets Jack's permission to help him recall more about Gray, but infiltrates the happy memories of their childhood on the coast of the Boeshane Peninsula so that they include child!Adam. To erase Adam, Jack will have to lose the memories of Gray as well. Jack decides that it's worth it and swallows his amnesia pill and loses consciousness, erasing Adam from existence.

The next day, no one remembers a thing, although they're a bit miffed at having lost two whole days somehow. Jack manages to open a box that the crew had been fiddling around with for a while, and it contains... sand, presumably from Jack's home.