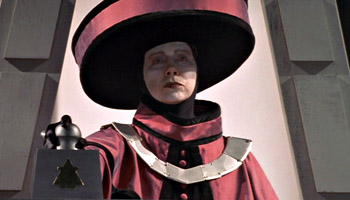 Like everything else, Farscape takes Planet of Hats and bitch-slaps it.
Advertisement:

In a Moyan transport pod, Zhaan catapults awake from her guilt-ridden dream of Crichton and the others dying horrible deaths. Crichton is poking around in the pod's guts and finds Rygel's leftover meal sizzling against the nav linkage. Looks like he and Zhaan are stuck for awhile. Zhaan passes the time by reflecting on the search for Crichton and the others. Zhaan and Pilot searched through 24 planets, countless moons and asteroids with no sign of them; Litigara was their last hope. Moya was anxious to leave Litigara's orbit to search for Talyn. So, in her search, Zhaan was getting desperate...

Flashback: Zhaan, Rygel, and Chiana hit the streets of Litigara, asking people if they've seen two Sebaceans and a Luxan. Zhaan comms Pilot and pleads for more time to find the others, but Pilot and Moya are obdurate. Meanwhile, Rygel is falling-down drunk, and Chiana is partying it up with the locals. Zhaan exhaustedly agrees to Pilot's timetable, then overrules Rygel and Chiana's resulting protests by tearfully accusing them of being useless in the search. Unaware that she's being tailed by one of the Litigarans from the bar, Zhaan charges off alone. However, she's stopped by a yelling intercom ordering her not to enter the crosswalk. A female Litigaran peeks around a corner while holding a remote control. The crosswalk tells Zhaan she can now cross. She does, and nearly gets run down by a car. A few beefy cops yank Zhaan and drag her off to jail for... jaywalking.

With Zhaan in the clink, Chiana tells the panicking Pilot to chill out. A public defender named Dersh arrives on the scene and speedily extrapolates what Zhaan's minimum sentence will be - 10 solar days. Chiana grumpily suggests getting another lawyer, and Dersh says they're welcome to try; over 90% of the population are lawyers.

Meanwhile, a powerful attorney named Ja Rhumann is on the phone with a nervous-sounding policeman, who is complaining that tonight's not a good night for him. Rhumann says they have the "perfect subject" and orders that the plan be carried out, then hangs up. That night, the Litigaran woman from earlier approaches Zhaan's cell and opens the door, giving her a map to the exit. Zhaan takes this obvious bait and makes a break for it. In the streets, Zhaan finds Chiana and Rygel (yay!) but trips over a dead body (uh oh!). Convenient cops rush to arrest her, and Zhaan's map burns up in her hands. The cop who was phoned by Rhumann earlier arrives on the scene, announcing that she's under arrest for murder.

Back in the pokey, Dersh reveals that the man Zhaan "killed" was Wesley Kenn, a rising young advocate for the utilities; the 10% of the population who aren't lawyers. The charge is that she murdered him with her bare hands, although due to Kenn's radical politics, nobody's too cut up about it. Chiana balks at the lawyer's limp defense, but Dersh says that if he pleads a defense he even suspects is false, he'll suffer the same fate as his client.

In court, Zhaan is led to a standing prisoner's dock. Rygel explains to Chiana that Litigara is ruled by law firms, and the one currently in power is run by Ja Rhumann. The judge is about to give the verdict, when Zhaan asks if it matters that she is innocent. Her counsel immediately panics and withdraws his representation. The judge says that she can't change her plea without counsel, so Chiana runs up to Zhaan's dock and says it's all dren and that she can't let Zhaan be condemned. Zhaan hisses at her to shut up and orders her back to Moya. Chiana ignores her and nominates herself and Rygel as Zhaan's lawyers.

In the same bar from the opening, Chiana and Rygel are sifting through some hefty law tomes. Chiana sees a Utility get maltreated by some esquires and asks if they get a lot of that. They're lawyers, the bartender seethes. It's their right. Chiana complains about the complexity of Litigaran law, prompting the bartender to covertly slide over a slim book. It's the basis for all the Litigaran laws, before they got all clogged with red tape. Barkeep taps The Axiom and tells them it's the only book they need.

Chiana calls Pilot to demand a little more time. Pilot says imperiously that Moya will give them until one more revolution of the planet. After that they're out of there, with no promises to return. Chiana notices the officer who arrested Zhaan has conspicuous burns on his face. The bartender mentions that it was a dual full moon the other night. Litigarans with blue eyes usually stay indoors because the moonlight burns them. Chiana thinks this cop might know a thing or two that might be worth their knowing as well, so she trots off to make a new friend. Meanwhile, Rygel asks the bartender about the "Light of Truth" mentioned in The Axiom and learns that it goes back to the very origin of the law – a burning stick which burns brighter when someone is lying.

Court is back in session. Back to questioning the cop, Chiana notes his purpled complexion. He admits he got it the night of the murder. Chiana notes that while he got burned, the victim — also blue-eyed — didn't. Chiana also brings up the fact that the cop once worked for Ja Rhumann's law firm — something she learned last night. Rhumann looks uncomfortable as muted hubbub fills the galley. Afterward, Chiana gets caught in an electro-net and taken to see Ja Rhumann. Rhumann sweats Chiana in his office by demanding that she stop her line of questioning, or else she and Rygel will be brought up on false charges. The next morning, Chiana takes Rygel's comm and tries desperately to get Pilot back on the line. All she hears back is static, but eventually Pilot responds and tells her that Moya overheard the whole conversation with Rhumann through the comm. She's decided to give them a little more time.

In court, Chiana calls Ja Rhumann to the stand. Chiana breaks a chair and designates one of the legs the Light of Truth. Rhumann blusters that the Light of Truth is a parable, and Rygel argues back that The Axiom would disagree. Chiana ignites the wood and holds it aloft. Rygel and Chiana proceed with their line of questioning, confirming that Rhumann stood to benefit from Kenn's death and that getting an "off-worlder" to take the fall would be mighty convenient. Rhumann covers himself by answering with "speaking hypothetically" and "it doesn't necessarily follow." Rygel reminds everyone that the cop got moonburn, but the victim didn't. Chiana goes on that maybe Kenn was murdered elsewhere and dragged to the alley where Zhaan was sure to be. Rygel whispers "Now." under his breath. Pilot pushes some buttons and Moya sends a beam of light to the planet. The stick explodes with light. With each denial of the murder conspiracy, the stick glows even more bright. Rygel asks if the judge will believe a guilty man or the symbol of her world. She orders Rhumann arrested and drops all charges against Zhaan.

Back in the present, Zhaan tells Crichton that she keeps seeing them die, even though they live. She says that the experience shows that her spirituality was lacking, but he says that since she recommitted herself to the Seek it may have been worth it.