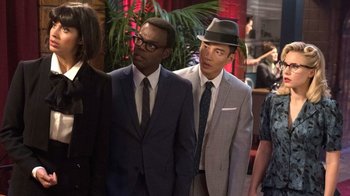 "Pass the NASCAR ketchup!"
Eleanor: So you can’t even lie to demons? They’re trying to torture us, man! We’re behind enemy lines!
Chidi: Well, principles aren’t principles when you pick and choose when you’re gonna follow them!

Michael formulates a plan for Team Cockroach to reach the Judge of the afterlife — the humans hide out in Bad Place headquarters as Michael attempts to get pins that will allow their passage through the portal to the eternal judge's office. Unfortunately, their arrival coincides with an event at the Museum of Human Misery, so the foursome must socialize among the demons to keep from being discovered. Eleanor ("Diana"), Tahani ("Rhonda"), and Jason ("Jake") have a relatively easy time of it, but when Chidi ("Trent") is mistaken for a top torturer by a real demon, he has trouble compromising his moral principles and lying his way out of the situation. Janet (masquerading as a Bad Janet) manages to gather the team just as the museum's newest exhibit is revealed... robotic versions of the humans of Neighborhood 12358W.

Meanwhile, Michael attempts to wrangle the pins out of Shawn under the pretense of putting together a team to go to Mindy St. Clair's place, but is unsuccessful — instead, Shawn has already broken the rules and sent a team to the Medium Place, only to realize that the humans aren't there. Realizing that Michael has betrayed them, Shawn finds Michael and the humans in the museum just as the other demons have realized that Rhonda, Diana, Jake, and Trent are the actual humans. Jason makes a Molotov cocktail and the team makes a break for it.

At the portal, Michael realizes that he was only able to steal three pins. He puts his own pin on Eleanor and pushes her through just as Shawn and his goons catch up to him.