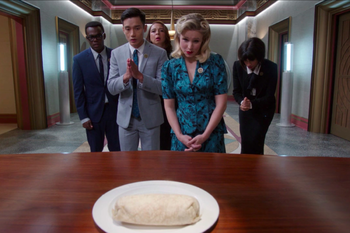 "Hi. I'm the judge. That's a burrito."
"Why can't one part of the calculation of our eternal fate be easy?"
— Eleanor

Eleanor, Chidi, Tahani, and Jason convince the immortal, all-knowing Judge - a cheerful TV addict named Gen - that they are worthy of being in the Good Place. Intrigued by the foursome, Gen decides to test them to see if they truly have improved. Team Cockroach agrees that if one of them fails her test, then they all go to the Bad Place.

Jason is shown a video game set where he must play against his favorite team, the Jacksonville Jaguars. He immediately sits down to play, disregarding Gen's instructions. Only later when she comes back to check on him does he realize that the test was supposed to measure his immaturity and impulse control, and that he was never supposed to play against his team.

Tahani must walk down towards the end of a hallway where every room is filled with her servants, help, and celebrity friends talking about their true opinions of her. She manages to ignore every single door except one — when she sees the door marked with her parents' names, her resolve crumbles and she enters the room. Even in death, her parents keep expressing their disapproval of her and their favoritism towards Kamilah. Tahani realizes she was never going to be enough for them, and leaves the room.

Eleanor is told that she and Chidi pass the test and can go to the Good Place, no strings attached, and now have to decide whether or not to leave Jason and Tahani behind. Puzzled over what to do, Chidi suggests abandoning their friends and ethics and achieving happiness together. Eleanor realizes that he's not the real Chidi, decides against going to the Good Place, and passes.

Chidi takes an hour and a half to pick a hat. This means that all of them save Eleanor failed their tests, so they're going to the Bad Place.

While all this is going on, Shawn leads Michael to his torture chamber — since "The Eternal Shriek" would be far too public for the coverup Shawn is attempting, Michael will instead be trapped in an empty room with no other forms of entertainment other than an endless stack of New Yorker magazines. He orders Bad Janet to unleash one of her signature farts, but then Bad Janet throws him against the wall and reveals herself to be Good Janet in disguise. Michael and Janet make a break for it and wind up in the Judge's chambers just as Gen is about to send off the team.