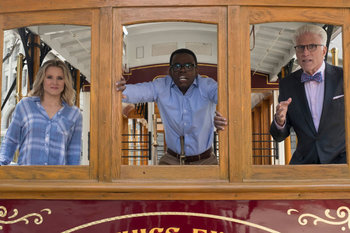 "These five people all need organ transplants, or they will die. Eleanor's perfectly healthy. Chidi, do you want to slice her open and use her organs to save the five sick people?"
"Look, this isn't about Chidi not being able to take a joke. This is about you. You're doing what I used to do. You're pulling an Eleanor."
— Eleanor to Michael

Chidi is teaching the trolley problem philosophical question, but Michael's practical knowledge of the afterlife scoring system conflicts with Chidi's theoretical approach. Supposedly as a learning aid, Michael subjects Chidi to realistic simulations of the trolley problem and related ethical questions, then admits he is deliberately torturing Chidi. Chidi expels Michael, who tries to placate the humans with extravagant personalized gifts that Chidi calls bribes. Chidi allows Michael to return after Michael offers a sincere apology. Meanwhile, Tahani and Jason continue their relationship, but Tahani insists on secrecy while Jason wants to go public. Janet becomes their couples counselor; over the course of a month, their relationship improves. But Janet is performing beyond her specifications, causing worsening glitches; Janet tells Michael the neighborhood could collapse.

Michael: This is why everyone hates moral philosophy professors.
Eleanor: Dude, I am on your side, but he is not wrong!
Feedback

Chidi explains "The Trolley Problem" to his ethics class. Michael, being a demon, thinks its about figuring out how to kill all of the participating people rather than focusing on the moral dilemma.

Chidi explains "The Trolley Problem" to his ethics class. Michael, being a demon, thinks its about figuring out how to kill all of the participating people rather than focusing on the moral dilemma.