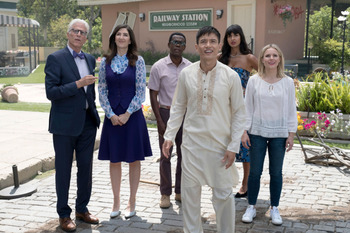 "The real Bad Place was the friends we made along the way?"
"All I've ever really wanted was to know what it feels like to be human, and now we're going to do the most human thing of all: attempt something futile with a ton of unearned confidence and fail spectacularly!"
— Michael

After hoodwinking Shawn into thinking that they'd escaped to Mindy St. Clair's house, the gang prepares to depart to the real Good Place. Michael summons a grandiose balloon to take them there, but it will only accept passengers who are the best versions of themselves. Eleanor, Jason, and Tahani are accepted, but Chidi fails because he's hung up on the previous versions of him, who could be 'better'. Having talked him out of it, the gang tries again, only this time Eleanor is rejected. As they break out into arguments, Michael admits that he doesn't actually know how to get to the Good Place.

Now faced with Shawn's impending discovery and eternal torture, the gang decide to enjoy one last night in the neighborhood. Michael is given an 'honorary human' box full of trinkets. Tahani and Jason quietly break up, while Eleanor admits to Chidi that she has feelings for him. Then Tahani, taking inspiration from Eleanor mocking her constantly "[wanting] to speak to your manager", has an idea — what if they appeal their case to the eternal Judge (the manager, in this metaphor). Deciding that they have nothing to lose anyway, the team decides to try it.