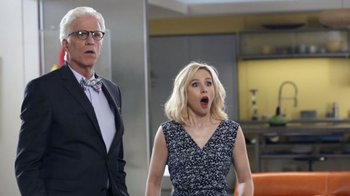 Just missing Shawn's deadline, Eleanor and Jason return, joining Chidi and Tahani. Shawn decides that they can choose any two of the four to go to the Bad Place. Many arguments are made for who should go and who should stay, with Real Eleanor offering to take one spot. As their arguments become more heated and frustrating, Eleanor laments how torturous this is... and then has an epiphany: the painful feelings the four of them have been experiencing was not by accident but by design, meaning they've been in the Bad Place all along. Michael admits that this is true - while brainstorming at his architect job, he had come up with an innovative idea for a section of the Bad Place posing as a Good Place neighborhood run by a stolen Good Place Janet where Eleanor, Jason, Chidi, and Tahani, the only human inhabitants, were to drive each other to agony while the demons worked to keep the humans on their toes. However, the plan went awry when Eleanor confessed; after that, Michael and everyone else had to scramble to keep things from going off the rails. He also didn't foresee Jason and Janet falling in love.

Eleanor then wonders why Tahani and Chidi are in the Bad Place, as they were ostensibly good and moral people. However, Tahani immediately realizes she was sentenced to the Bad Place because her charitable deeds weren't motivated by genuine altruism, but by a selfish desire for attention and to outdo her sister. Chidi initially believes he was sentenced to the Bad Place because he still drank almond milk despite knowing it was bad for the environment, but Michael clarifies that it was actually due to his rigid and indecisive behavior, which he refused to correct in any way despite knowing it made his friends and family miserable.

With his scheme exposed, Michael begs Shawn for a "redo" by erasing the humans' memories and changing some parameters, figuring the reason why he failed was that putting the humans together turned them into a team; by putting them farther away from each other in a second attempt, it could be a slower torture. Shawn grants Michael's request. In a last-ditch effort to do something, Eleanor rips out a page from one of Chidi's books and writes a message to herself which she then hides in Janet's mouth. Eleanor taunts Michael, telling him he'll never win, to which he snaps his fingers, erasing the humans' memories. Eleanor awakens in the waiting room once again and Michael takes her around the neighborhood. After taking her back to her "house", Janet appears and gives Eleanor the note she'd written to herself. It reads, "Eleanor - Find Chidi".

By the end of Season One it is revealed that Michael was evil, having orchestrated the events of the entire season as a slow-burn system of torture.

By the end of Season One it is revealed that Michael was evil, having orchestrated the events of the entire season as a slow-burn system of torture.