Recap / The Good Place S2E01 "Everything is Great!" 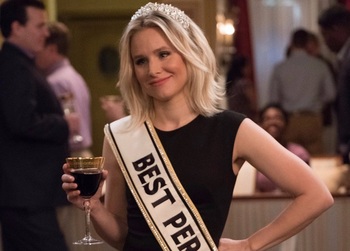 "Oh, you gotta be forking kidding me."
"I think you will [let me down]. I think this entire project of yours is stupid and doomed to fail. I think you're going to be retired, eliminated from existence, and burned on the surface of a billion suns. And I have no doubt that you and your cockamamie experiment will go down in history as colossal failures."
— Shawn

Eleanor, Chidi, Tahani, and Jason have all had their memories erased, and Michael starts the fake Good Place over with a few things changed around to subtly torture the humans without them ever realizing it. Shawn warns Michael that he better not fail, for Michael will be forced into "retirement" if he does.

Eleanor is paired off with a new "soulmate" named Chris, a muscular gym bunny who keeps running off to go work out anytime Eleanor tries to talk to him. Janet then arrives to give Eleanor the note she wrote to herself to find Chidi. Already suspicious, this makes Eleanor warier of what's going on.

Meanwhile, Chidi is forced to choose between two potential soulmates; just as he is about to choose Angelique, who seems ideal for him, Michael determines that the other woman, Pevita, with whom Chidi felt no connection, is his accurate soulmate. When Eleanor finds him, he is too distracted by his own situation and is unwilling to help her.

Tahani is dissatisfied that her new soulmate Tomas is very short and has unrefined tastes, and that their home is small. Michael plans for Eleanor to get drunk and behave badly at the welcome party, but instead, Tahani gets drunk and makes a scene.

Jason is once again forced to pose as Jianyu the silent Buddhist monk. His new soulmate is Luang, a monk who is meant to be his spiritual companion. Luang accompanies Jason and copies his every action, leaving Jason bored and desperate to escape. Jason quickly gloms onto Janet, who is nice to him.

Vicky, the demon who portrayed "Real Eleanor" in the first attempt, is frustrated by her new minor role as the pizza parlor owner Denise and tries to complain about it to Michael, who simply brushes her off.

Eleanor finally gets Chidi's attention and he realizes the paper Eleanor's note was written on is from a book in his collection, and he suspects they have met before. At Eleanor's house, Eleanor admits that she doesn't belong in the Good Place. Michael, Janet, Tahani, Jason, and everyone's supposed soulmates arrive. Tahani and Jason openly express their dissatisfaction and Eleanor figures out that they are not in the Good Place; she reveals the note. Michael again erases the humans' memories and reboots the fake Good Place, but conceals the reboot from Shawn, who disallowed a third attempt.