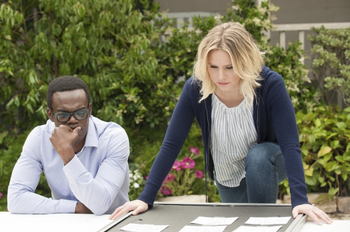 "...Which obviously never worked, because you're here, and you're back, so, good luck."
"I was a member of a sixty-person dance crew in Jacksonville. We were called "Dance Dance Resolution: We Resolve to Dance". One day, Donkey Doug and I got into a fight, because I'd framed his girlfriend for boogie board theft. So he started a new dance crew called "Hashtag Doug Life" and immediately challenged us to a dance-off. He said, "Meet us inside the abandoned orange juice factory at midnight." That night, as the clock struck twelve, me and my crew came together with a determination we had never shown before... and slashed all their tires. It was dope. The end. By Jason Mendoza."
— Jason

Michael reboots the neighborhood to try torturing Eleanor, Chidi, Tahani, and Jason again. However, no matter what he does to modify it, Eleanor eventually figures out its true nature, over and over again (and during Attempt #649, Jason figured it out). Michael grows more frustrated as time goes on, even hitting rock bottom during Attempt #484 where he gorges himself on junk food and alcoholic drinks, but refuses to give up.

Michael launches Attempt #802. He goes outside to a neighborhood meeting, and nobody is there except Vicky, who says he's lost control of the experiment and the demons have gone on strike. Vicky complains that everyone is sick of the constant reboots, they often can't remember what their jobs are, and she herself is still upset about the size of her part. They have a list of demands, and Vicky says Michael will have to fit them into his system. Hers is to take over the next reboot and be a "main character". Michael is outraged, but Vicky threatens that if he doesn't comply with this, she will reveal the 800 reboots to Shawn.

Meanwhile, Eleanor is taking ethics lessons from Chidi again. She's bored and suggests they go outside, where they notice the town streets are empty. They notice a strange burning smell and follow it, finding a group of demons (including one lava monster named Todd who isn't wearing his human skin-suit) complaining about the constant reboots and of Michael's version of the Bad Place in general. Eleanor and Chidi are horrified to learn that they've literally been put through hell hundreds of times and got their memories erased and try to figure out what to do. They use Janet to escape and she takes them on the train to the Medium Place, where Mindy St. Claire greets them.

Mindy reveals that this is the sixteenth time Eleanor has come by here with Janet and some other human and is frustrated that they've forgotten to bring cocaine again. She explains that Eleanor, Janet and one or two of the other humans (usually Chidi, but sometimes Jason and/or Tahani) will come to the Medium Place to escape from Michael, but they would eventually end up going back to rescue whoever was left behind. Chidi says they need a plan, but everything he or Eleanor suggests is repeated back to them by Mindy. She pulls out a board consisting of a list of all the things they've tried before to defeat Michael, which include trying to seduce him, outright attacking him, or trying to psychologically screw with him.

Chidi and Eleanor try to go over their options. Chidi is discouraged and says it's pointless - they're trapped in an endless loop and they lose their memories every time they try to break out of it. Eleanor gets upset with him giving up and goes to complain about him to Mindy. Mindy is tired of her complaining, and says Eleanor and Chidi have it bad for each other. Eleanor denies this, but Mindy shows her a video she recorded from the sixth time they were at her home, showing Chidi and Eleanor in bed together professing their love for each other. Eleanor is stunned by this; from her perspective, they've only known each other for a few days and she considers Chidi to be an uptight and humorless dork but Mindy asserts there's a reason why they keep coming back to each other. Eleanor calls Janet and Chidi over to announce they're leaving and takes the tape back with her.

Michael is standing on a bridge, and Jason comes calling for anyone, so Michael takes him aside to bounce ideas off of, as he feels he's caught between a rock and a hard place - he's certain Vicky's plan would be a failure, but if he doesn't go along with them otherwise, she'll rat him out to Shawn. Jason then relays the story of how he and his old friend Donkey Doug were in a dance team, and then they got into a fight due to Jason framing Donkey Doug's girlfriend for stealing a boogie board, so Donkey Doug organized a rival dance team and challenged Jason's dance team to a dance-off, so Jason's team went there and slashed their tires. From something in there, Michael gets an idea.

Michael gets to Eleanor's house, where she, Chidi and Tahini are, and Jason joins them; Eleanor says they keep figuring out the puzzle of the "Good Place", so they're winning and he's losing. Michael says, actually, they're on the same page and he wants to team up with them.

Jason figures it out

Attempt #108 shows just how big of a failure Michael's neighborhood is when Jason - an idiot who has no idea what is going on half the time - manages to figure out that they're in the Bad Place.

Jason figures it out

Attempt #108 shows just how big of a failure Michael's neighborhood is when Jason - an idiot who has no idea what is going on half the time - manages to figure out that they're in the Bad Place.