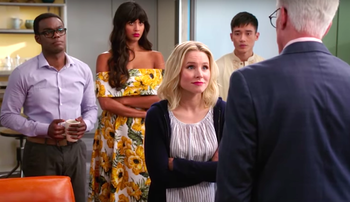 "Oh, let's not get all caught up on who lied to whom or which one of us created an entire fake reality in order to cause eternal misery for the others; that's ancient history."
"The Bad Place is about to be outsmarted by a cowardly traitor, four dum-dums, and a robot."
— Eleanor

Michael seeks to form an alliance with the four humans, revealing to them his plan—he will reboot the neighborhood but secretly leave their memories intact, and they will feign ignorance to throw the other demons off. If they refuse, Michael asserts they will again detect the ruse, Vicky will expose him, and the humans will be remanded to traditional, hellish torture, while Michael himself will be forced into retirement. Furthermore, Michael promises that he can get the four into the real Good Place.

Chidi agrees quickly, accepting that his work on ethics in life was unsuccessful. Jason is oblivious, but Michael's bow tie earns his trust. Tahani insists she belongs in the Good Place, but concedes after Michael helps her remember how she died: she was crushed by a statue of her sister Kamilah that she pulled down in a fit of jealousy at having been upstaged by her again, demonstrating Tahani's self-obsession.

Eleanor, however, plans to flee to Mindy's house, but accedes to Michael's plan after Michael informs her that Chidi never refused to help her when she asked for it. She adds a condition: Michael must participate in Chidi's ethics classes. Even though Michael sees humans as "cockroaches," he agrees. The neighborhood is rebooted, with Vicky taking on the role of the top point earner and honorary mayor. The newly christened "Team Cockroach" meet in secret and are joined by Janet, whose programming compels her to make humans happy; thus, she will support the only real humans present.