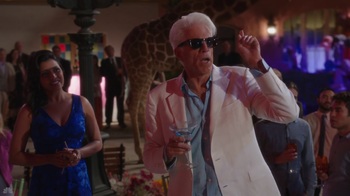 "Okay, I know what you're thinking. Birth is a curse, and existence is a prison. But don't think about that. Don't be sad, you guys."
"No, no. This is good. [Michael]'s having an existential crisis. It's a sort of anguish people go through when they contemplate the silent indifference of our empty universe. Look, the good news is, if he can work through this, it's the first step towards understanding human ethics."
— Chidi

When Chidi realizes that Michael's immortality prevents him from being able to engage with human ethics, he confronts Michael over the possibility of existence-ending "retirement". Michael becomes despondent when he grasps the concept of death. Eleanor gets Michael to ignore the feeling, causing him to replace this existential crisis with a stereotypical midlife crisis, which Chidi determines is less psychologically productive. Eleanor explains to Michael that sadness over death is intrinsic to humanity; he thanks her, and Chidi decides their studies can move forward.

Meanwhile, Tahani is tortured by having her birthday party for Gunnar overshadowed by an extravagant one planned by Vicky; Tahani is miserable despite knowing Vicky's plan and laments her character flaws that enable such superficial problems to affect her. Jason praises Tahani and they sleep together; both enjoy it, but Tahani wants to talk about it afterward while Jason is oblivious.

Eleanor recalls formative experiences concerning death: the day her alcoholic mother flippantly explained how the family dog died to a young Eleanor, an adult Eleanor attending her father's funeral, and an occurrence when Eleanor broke down crying at a Bed, Bath & Beyond upon seeing a toothbrush holder designed for a family's use.