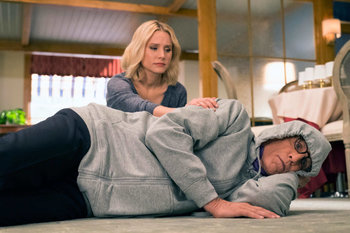 "I give up. I can't help the people I promised that I would help. I feel like Friends in season eight, out of ideas and forcing Joey and Rachel together, even though it made no sense."
Eleanor: I need to figure out a way both help [Michael] and not help him at the same time.
Chidi: That's literally not possible.
Advertisement:

Eleanor distracts Michael from his investigation in order to avoid detection. He tells her that architects don't normally live in neighborhoods; doing so was his own idea and will be discredited by his failure. Meanwhile, Tahani tries to bond with Jianyu, forcing Chidi to go to great lengths to protect Jason's secret. Chidi and Tahani end up bonding, but Tahani ultimately accepts Jianyu as her soulmate after he gives her a gift that Chidi arranged. Michael concludes that he is the cause of the problems and announces his impending departure.

In the past, Eleanor ditches house-sitting for a friend in order to attend a Rihanna concert, resulting in her friend's dog suffering a permanent disability; Eleanor didn't care.