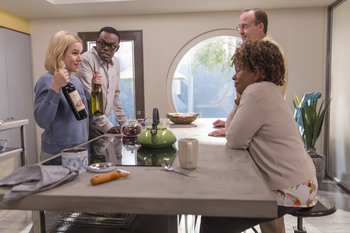 "Okay. Shouldn't take long. Between hour and, um, eleven months. Somewhere in there. Okay. Bye... Don't go outside."
"It's not just that helping me is a full-time job that you feel you have to do. The real problem is, that the more you help me, the greater the chance is that I can stay here, and me staying here means you'll never get a real soul mate. I'm basically a Utilitarian nightmare."
— Eleanor

Eleanor is pleased that she is learning to be considerate of others and learning about John Stuart Mill's Utilitarianism, but Chidi is dissatisfied with spending all of his time teaching Eleanor. Michael protects the neighborhood from the sinkhole by quarantining all of the residents. He insists that Eleanor and Chidi host a couple who live near the sinkhole; the observant couple concludes that Chidi is hiding something. Chidi admits he never had a real relationship with a woman before; Eleanor realizes he's disappointed that she's not his true soulmate and decides to be a better friend to him by arranging the exact leisure activities he described to her. Meanwhile, Tahani reads Michael's private documents and learns that she has the second-lowest score in the neighborhood. She tries to raise it by aiding Michael, who has to save her from the sinkhole; he tells her that scores don't change after death and that she should be satisfied to be one of the best people who ever lived. The sinkhole closes after Eleanor's kind gesture and Michael informs her that she must help him uncover the cause.

Tahani's flashbacks show that she lived her entire life in the shadow of her sister, Kamilah, finally deciding to live independently after their parents' deaths.