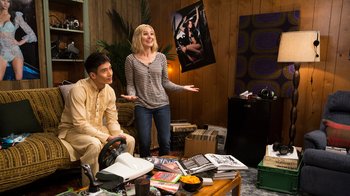 "Pretty unique decorating style you have here, Jianyu. It's like, "12-year-old boy" meets "13-year-old boy.""
"When I say I'm meditating, I'm just trying to figure out what the fork is happening. I think we might be in an alien zoo or on a prank show."
— Jianyu/Jason

Jianyu tells Eleanor he is really Jason Mendoza, a Filipino-American drug dealer and amateur DJ from Jacksonville, Florida who has gone along with the fiction of being a monk because the supposed vow of silence enables him to avoid detection. Jason decides to express his true identity, while Eleanor and a stunned Chidi try to convince him to stay hidden, fearing Eleanor will also be exposed. Tahani helps plan the gala opening of Patricia's restaurant. When Jason plans to share the real details of his life at the event, Eleanor creates a distraction by destroying Patricia's masterpiece cake, causing a sinkhole to open. Jason agrees to join Chidi's ethics class, but is an even less apt student than Eleanor. Tahani discovers that the sinkhole is growing, not closing as Michael expected.

Flashbacks show that Jason was hired as a famous EDM DJ's stand-in and was rejected by the crowd when he played his own music. He tells a friend that he longs to be appreciated as his authentic self and then vandalizes the DJ's boat.