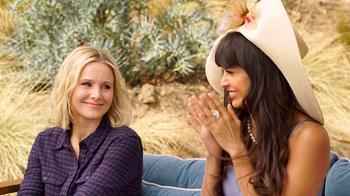 "Oh, hurrah! Such fun."
"Tahani might be a little British and condescending at times, but she devoted her entire life to helping other people. She's a good person. Accept that."
— Chidi

Eleanor has grown annoyed with Tahani's overtures of friendship and haughty attitude, and suspects Tahani of writing the note. She is determined to prove Tahani has some dark secret, but ultimately accepts that Tahani is genuinely good and begins to form a real friendship with her, comforting her over her dissatisfaction with Jianyu's vow of silence.

Michael tries to get Chidi to take up a hobby, but Chidi only wants to work on his ethics manuscript; after Michael admits that it is terribly written, he agrees to become Chidi's adviser.

Janet cycles through a series of bizarre personalities to become more human-like.

Michael recruits Eleanor to help investigate the problems in the neighborhood. Later that night, Jianyu reveals that he wrote the note; he confronts Eleanor, speaking to reveal that he also doesn't belong in The Good Place.

In Eleanor's flashback, her boyfriend Andy makes a conscious effort to be good, but Eleanor concludes that being good is pointless and too much work in a world full of bad things.