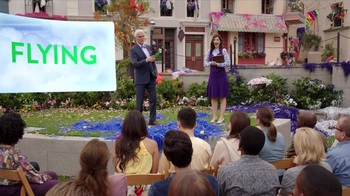 "I'd say [flying's] like fifty million simultaneous orgasms. But better. How's volunteer garbage pickup?"
"I don't know what to do here. This is a mess, morally speaking. This is a putrid, disgusting bowl of ethical soup."
— Chidi

Eleanor avoids suspicion in the aftermath of the chaos, and Michael fears he has failed in his first big project. Tahani organizes a clean up day, but anyone who volunteers will miss out on the opportunity to learn how to fly. Chidi agrees to teach Eleanor ethics and how to be a good person, and requires her to volunteer in the cleanup efforts. She does, but then hides the trash to go flying after all, causing a trash storm to occur. Chidi loses faith in her. That night, Eleanor feels guilty and cleans the neighborhood herself; Chidi sees her and agrees to continue to help her. Later, a note is slipped under Eleanor's door, warning her that whoever wrote this knows that she doesn't belong in The Good Place. Flashbacks to Eleanor's life show that she habitually shirked the responsibility of acting as a designated driver.