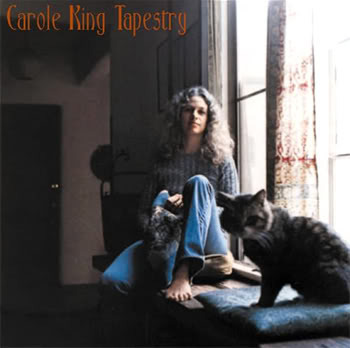 "An everlasting vision of the ever-changing view..."
"Travelling around sure gets me down and lonely
Nothing else to do but close my mind
I sure hope the road don't come to own me
There's so many dreams I've yet to find"
—"So Far Away"
Advertisement:

Tapestry is the second studio album by Carole King, released in 1971. At the start of that year, King was best known as a writer of songs for others, particularly in partnership with her husband Gerry Goffin. In 1962 her own recording of a song she wrote for Bobby Vee, "It Might As Well Rain Until September", was a one-off hit; modestly in her own country but top 5 in Britain. Her debut album Writer from 1970 made the lower reaches of the Billboard 200 and had little impact abroad. So when this album came out, there wasn't much anticipation for it. As it turned out, its sudden success was and remains a phenomenon. It was the biggest-selling album by any solo artist until overtaken by Michael Jackson's Thriller from 1983. With 25 million copies sold worldwide, it remains the biggest-selling album by a female solo artist, and in the age of free downloads that record seems likely to stand indefinitely. It won the 1972 Grammy Award for Album of the Year. In 2003 it was added to the US Library of Congress's National Recording Registry. Tapestry remained in the Billboard 200 for a total of 513 weeks, a record surpassed only by Pink Floyd's The Dark Side of the Moon. The album combines original songs with King's own interpretation of songs written for others.

What makes Tapestry so special? Firstly, it's a collection of songs written and simply performed by a master of the craft. None of them are blockbusters but all of them are memorable. Secondly, the theme that runs through them is of emotions that are grounded in the everyday. There is no love-at-first-sight, no raging lust, just the warmth of people who have been through a lot together and are comfortable in each other's company, or the longing for a partner who is away, the sweet sadness of an affair that has run its course, reflection on a life nearing its end. The artist herself is packaged here as Everywoman, unmade-up, dressed for comfort with her craft-work and her cat, in a domestic setting that may in truth be Laurel Canyon but made to look like the house next door. The singer and her songs might be your neighbour, touching your own life.

Will You Trope Me Tomorrow?: