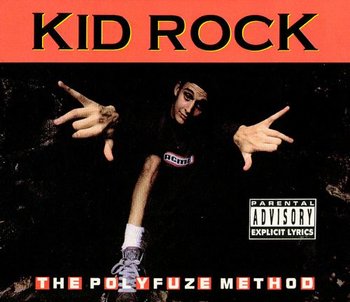 "I'm the best in the motherfucking Midwest, because there's no contest."
— "Killin' Brain Cells"
Advertisement:

The Polyfuze Method is Kid Rock's second album and the Even Better Sequel to Grits Sandwiches for Breakfast.

The Polyfuze Method is noted for its Psychedelic Hip Hop sound and showed the influence of psychedelic drugs, including LSD and mushrooms, on Kid Rock's music. It also makes extensive use of Sampling, as well as live instrumentation. During the recording for the song "The Cramper", Kid Rock hired a flute player to play a solo on the track. "Killin' Brain Cells" features Kid Rock playing bass and electric guitar solos, and also features a harmonica solo.

A lot of the lyrics feature Kid Rock humorously, and profanely, discussing sex, alcoholism, drug use, and partying. Pop culture, fast food and social deconstruction are other topics.

Compared to his first album, The Polyfuze Method saw better reviews from critics, and helped Kid Rock develop a following in Detroit which consisted of "white kids who listened to Gangsta Rap and dropped acid", and also featured a more diverse and experimental sound, drawing from Psychedelic Hip Hop, funk, rock, and more.

This album is also where "I Am the Bullgod", one of Kid Rock's best known songs, made its first appearance, though only on the vinyl, until 1997, when it appeared on the reissue.

The vinyl and 1993 CD releases had different track listings and were missing tracks that appeared on one release, but not the other.

In 1997, an Updated Re Release called The Polyfuze Method Revisited was put out, which combined all of the tracks from the vinyl and previous CD release, and added a previously unreleased song, "Rain Check", and an remix of the intro, "Fred", which was a sample of a man talking about seeing God after dropping acid.

The EP Kid Rock put out the same year as this album's original release, Fire It Up, featured alternate versions of "I Am the Bullgod" and "My Oedipus Complex", tracks from The Polyfuze Method and a track from the sessions that was never released elsewhere: a cover of Hank Williams Jr.'s "A Country Boy Can Survive".

There were three different releases of the album, each with a different track listing. The Polyfuze Method Revisited CD from 1997 is the most complete of the three, containing all of the tracks from the vinyl and previous CD releases.