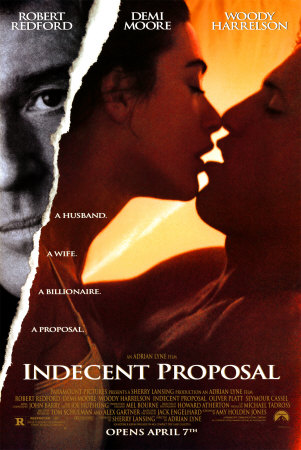 "What would you do if someone offered you one million dollars to sleep with your wife?"
— The movie's Tagline
Advertisement:

David and Diana Murphy (Harrelson and Moore) are a happy yuppie couple of childhood sweethearts involved in the real estate industry who run into financial trouble when the said industry undergoes downturn. They embark on a trip to Las Vegas to try and win it big, but lose everything. Just when all hope seems lost, the two encounter billionaire John Gage (Redford). Gage is attracted to Diana and thus offers the couple a proposition; he will give them one million dollars if he can spend one night with her. After much terse debate, they decide to accept, assuming it will be just sex and that they'll be able to forget about it. However, after the deed is done it turns out it isn't that easy to just pass up...

Obviously, I'd sleep with her.