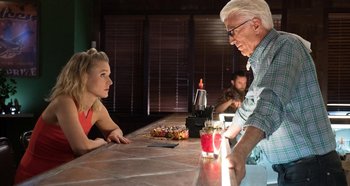 "Okay. Here we go."
"The real question, Eleanor? What do we owe to each other?"
— Michael

While the humans plus Janet make their last confessions to one another, including Chidi kissing Eleanor, Michael tries to argue with the Judge that the current system of judging people into the Good and Bad places is unfair — his experiment proved that humans can change even after death. Gen is seemingly unconvinced, believing that the humans' improvement was spurred purely for their desire for a reward at the end (in this case, getting into the Good Place), and she and Michael attempt to hammer out a solution, eventually posing two options: either the humans go to the Bad Place, or spend an unknown amount of time in personal Medium Places apart from each other as Michael works their case. Eleanor protests that neither idea sounds appealing, and Michael has a third idea — what if the humans were just given the "right push"? Gen is intrigued, and snaps her fingers before Eleanor can ask what is going on.

Eleanor is alive again, back on Earth, and has been saved from her death by a mysterious figure. Shaken to the core, she realizes that she's been wasting her life being a terrible person and strives to be a better one. She proceeds to quit her shady job and gets a new one at an environmental organization, and generally acts kinder to her coworkers and the people around her, including coming clean to her roommate about the "Dress Bitch" fiasco. However, this newfound resolve to improve herself eventually crumbles, and after six months, she's reverted back to her trashy ways.

Distraught, Michael subtly intervenes by posing as a friendly bartender. He listens to Eleanor's stories and points out that she's expecting a reward for being a good person. He asks her to consider "what we owe to each other". This question spurs her to read about philosophy, eventually stumbling upon a three-hour online lecture by Chidi on the topic of why people do good things. Eleanor then flies to Sydney and asks to speak with him.