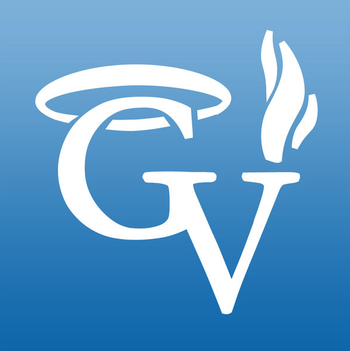 The game's icon.
"Greetings, fellow stranger!
Remember those times when someone you know was telling you something like "I need to harvest these crops..." or "We need to kill 65,340,285 boars..."? Well, forget it! You are the god here, and those things are not worth your divine attention! Leave all the dirty work to your pawn and enjoy the only thing that matters in any game - fun."
— The game's introduction and premise

Godville is a parody of most RPG games out there, combining internet memes, popular culture and Biting-the-Hand Humor to create a text adventure ZPG (Zero Player Game) which plays itself. The concept is simple, you create an Idiot Hero who writes in his/her 'diary' (-er, Twitt-) about all the Random Encounters they have with silly monsters in order to build a temple with golden bricks at 100%. Impossible?

Not impossible, although very difficult and time-consuming once you find out one golden brick is 0.1% of the whole temple. Your hero will need 1000 of those to finish the structure. After the temple's construction, the hero will attempt to build an additional ark with wood and save retirement money.

This game was developed by Dmitry Kosinov and Mikhail Platov. The original was a Web Game, released in 2007 entirely in Russian. However, the version most people are familiar with is an English-language game, which can was first released in 2010, and can found on your iPhone/Android or right here