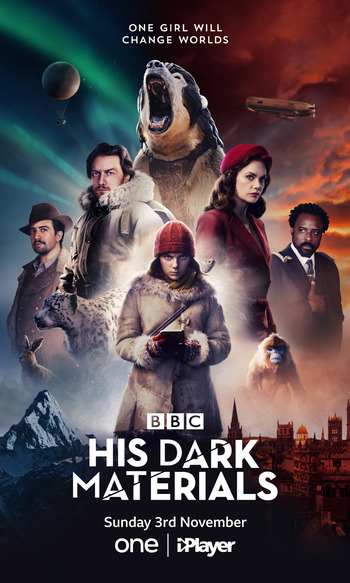 The truth lies beyond the world we know.
His Dark Materials is a 2019 fantasy TV series that runs on BBC One in the UK, and on HBO in the rest of the world. It is based on the trilogy of books by Philip Pullman: Northern Lights/The Golden Compass, The Subtle Knife and The Amber Spyglass.
Advertisement:

The protagonist is a young girl, Lyra Silvertongue (played by Dafne Keen) in a fantasy world very similar to our own, in which people's souls live outside their bodies in the form of dæmons, which take on animal forms according to the person's personality.

Notably, this show is a co-production between the BBC and HBO. The show aired on Sundays in the UK on BBC One, and the following night everywhere else in the world on HBO.

The series is unrelated to the 2007 film adaptation The Golden Compass (outside of using the same source material), which only adapted the first book and didn't have any sequels.

It was renewed by the BBC for another season of seven episodes (Unfortunately losing one standalone episode to the COVID-19 Pandemic, as one day into filming, the UK's restrictions came into effect), and Series 2 started airing on November 8th, 2020.

The third and final series premiered on December 5th, 2022 in the US and December 18th in the UK, with all of Series 3's episodes made available for streaming on BBC iPlayer immediately after the first episode aired on BBC One.

His Dark Materials contains examples of: