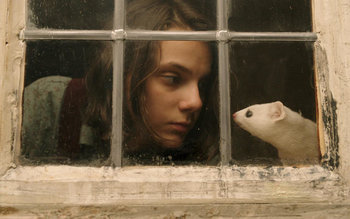 Young Lyra Belacqua is raised as a ward of Jordan College in Oxford. Her closest friends are her daemon Pantalaimon (nicknamed Pan) and a servant boy named Roger Parslow. Lyra admires her uncle, Lord Asriel, a polar explorer whose research into Dust and what he believes is a multiverse is regarded heretical by the ruling Magisterium. Lyra saves Asriel from being poisoned by the Master of Jordan College, who foresees Lyra's future importance through an alethiometer, one of only six ever made. After Asriel leaves on another polar expedition, the Master arranges for Lyra to stay with Marisa Coulter, also an explorer who offers to groom Lyra as her protégée in London and promises to search for Roger. Meanwhile, the mysterious "Gobblers" have kidnapped a Gyptian boy named Billy Costa and later kidnap Roger. The Master gives Lyra the alethiometer that belongs to her uncle. The Master says it tells the truth and is for Lyra's protection. He warns her to tell no one, including Mrs Coulter, that she possesses it. Lyra accompanies the charismatic Mrs Coulter to London in the hope of finding Roger. The Gyptians pursue the Gobblers to London.