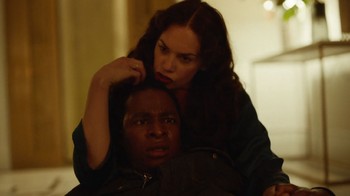 Billy's older brother, Tony Costa, and his friend, Benjamin, rescue Lyra and Pan from the Gobblers and take her to the Gyptians' camp. Lyra accepts their protection, and also agrees to help them find Roger and the other missing children. Following a raid on Jordan College, Mrs Coulter learns that Lyra has an Aleithiometer and sends two robotic "spy flies" to track her. Boreal crosses back to the alternate World where Thomas informs him that Grumman is an explorer from his world named John Parry. Thomas also reveals that Parry has a wife and child in that world. Boreal hires another man to find them. Ma Costa reveals that Mrs Coulter is Lyra's mother through an affair with Asriel. Asriel then killed Mrs Coulter's husband in a fight and hid Lyra at Jordan College. Lyra helps Gyptian king, John Faa, to persuade the others to travel North and find the captive children. Tony and Benjamin raid Mrs Coulter's apartment, finding a list of missing children including Billy Costa. The boys are discovered; Tony narrowly escapes but Benjamin deliberately falls down the lift shaft, killing himself, to avoid being captured by Mrs Coulter. Lyra discovers she intuitively can read the Aleithiometer (which tells her Benjamin has died) before she and Pan are attacked by the spy flies. Farder Coram captures one spy, but the other escapes and returns to Mrs Coulter, divulging Lyra's location.