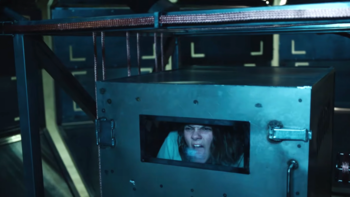 Lyra, posing as "Lizzie", mingles with the captive children at Bolvangar and she finds with Roger. She learns that the Gobblers are using an experimental procedure called intercision to surgically sever the children from their daemons. Mrs Coulter later visits Bolvangar and, discovering that Lyra and Pan are about to undergo an intercision, halts it. Mrs Coulter attempts to persuade Lyra to join her, claiming Dust is the source of sin and that all adults are "infected" by it. She wants Lyra to give her the alethiometer, but Lyra tricks her and attacks her with the captured spy-fly. Lyra escapes and destroys the intercision machine and the base's generator. The children are rescued by the Gyptians, Iorek, Scoresby and the witch Serafina Pekkala, who kill the scientists and mercenaries, although Mrs Coulter escapes. The Gyptians return south with the rescued children, while Lyra, Roger and their daemons travel north with Scoresby and Iorek in the hot-air balloon to reach Lord Asriel on Svalbard. However, flying bat-like monsters called cliff-ghasts attack them, and Lyra falls from the airship. Meanwhile, Will Parry reads his father's letters as Thomas and another mercenary spy on him.