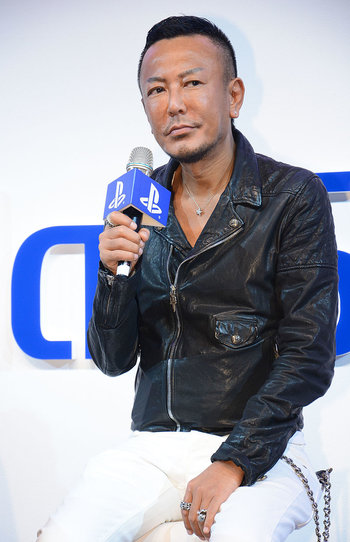 Toshihiro Nagoshi (born June 17, 1965) is a video game developer for Sega and Atlus. His biggest claim to fame is the Yakuza series as the founder of Ryu ga Gotoku Studios, although his involvement with Sega is long and storied.

Nagoshi joined Sega shortly after graduating from university with a degree in movie production. He would be assigned to AM2, the development team headed by Yu Suzuki, and work on many of the team's most famous games, including Virtua Racing and Shenmue. It was during his time with AM2 that he would also direct development of his first game, Daytona USA, which went on to be a smash hit in arcades.

Going into The 2000s, Nagoshi would join Amusement Vision, a development team that specialized in arcade titles. When Sega shifted to third-party development following the commercial failure of the Sega Dreamcast, Amusement Vision would shift its focus to developing games for the Nintendo Gamecube. Games that he developed during this time include Spike Out, Super Monkey Ball and F-Zero GX — the latter of which he worked on alongside Shigeru Miyamoto. Nintendo was so impressed by how F-Zero GX turned out that they personally called Nagoshi to see the game's source code and figure out how he managed to create yet another smash hit.

Nagoshi's career would skyrocket to new heights in 2005 with the development and release of Yakuza, one of the most expensive games he developed. The runaway success of Yakuza made Nagoshi a household name in Japanese game development, and the development team that helped to work on the series, CS1 R&D, would rechristen itself in honor of their crowning achievement, Ryu ga Gotoku Studio.

Nagoshi's philosophy towards game development emphasizes accessibility, since he is, by his own admission, bad at playing video games.