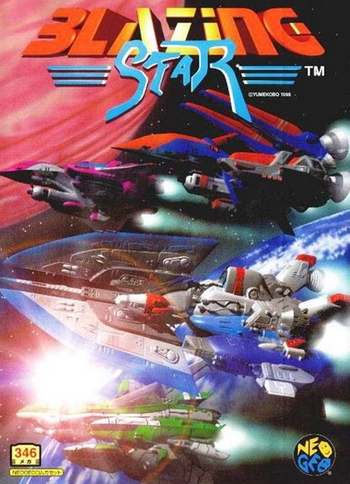 A Horizontal Scrolling Shooter released for the Neo Geo in 1998, Blazing Star was developed by Yumekobo as the semi-official sequel to Pulstar, though not so much like R-Type this time around. The game makes extensive use of pseudo-3D prerendered sprites, and the intro contains brief anime and CGI cutscenes. Frequent Engrish voice samples and captions are used (including the line "You Fail It!").
Advertisement:

Sometime in their past, the planets Remuria and Mutras started an interplanetary war that showed no sign of ending. The endless fight between the human-like inhabitants of the two planets had gone so long that weapon development moved into dangerous territory: Organic Weapon Production combined with alien technology. Soon, a sentient weapon - Brawshella - was born. Brawshella gathered all animal life on both planets and forced them to do its bidding and attack the humans. In a week, the humans were assimilated by Brawshella.

Yet, once they were assimilated, they found no other purpose in life but to continue fighting each other. After a while, four of the assimilated fighter pilots regained their consciousness and remembered their pasts. Upon discovering their humanity, the pilots were conflicted with following Brawshella's orders or fighting it to fully regain their independence. The pilots finally turn against the machine in a battle to rediscover themselves and reclaim their planets.

In addition to the AES version that comes standard with Neo Geo titles, the game received multiple home ports. A mobile port for iOS and Android was released in 2012 which has Bluetooth controller support, as well as a Wii Virtual Console release exclusive to Japan. HAMSTER Corporation would then port the game to Nintendo Switch in 2017 as part of the ACA NEO GEO series (itself a subset of the Arcade Archives line), and to PlayStation 4 and Xbox One in 2018.

Tropes used for this game

YOU TROPED IT!
YOUR SKILL IS GREAT!