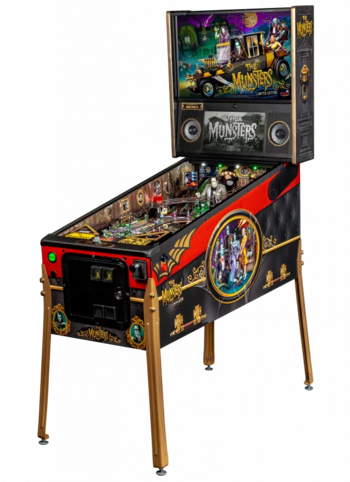 The Munsters is a pinball machine designed by John Borg, sporting code work by Dwight Sullivan, and released by Stern Pinball in early 2019. It is unsurprisingly based on the 1960s sitcom of the same name.

The game revolves around collecting each member of the Munster family in order to reach "Munster Madness". This entails playing through several modes themed after each of them (excluding Eddie but including their pet dragon Spot, who resides under the left ramp). The rules are designed to be simple and easy to grasp, yet deep enough for more advanced players to devise strategies for maximum scoring. This is primarily owing to features like the Zap Button, which can be charged to collect "Zap Jackpots", and the ability to stack different categories of Super Jackpots to collect all at once. The Premium and Limited Edition versions also add "Grandpa's Laboratory", a mini-playfield underneath the regular one (similar to Black Hole) that uses specialized, equally small pinballs.