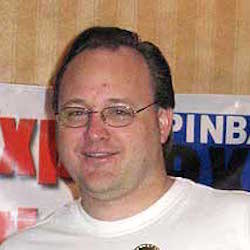 Keith "Keefer" Johnson is an American Pinball programmer, designer, and player. Among pinball enthusiasts, he is reknown for the highly complex and multileveled rules in his games.

Born in 1972 in Washington D.C., Keith grew up hooked on Video Games like many other children of The '80s were. However, he became disillusioned with them around the turn of the decade, as arcade Beat Em Ups like The Simpsons and Teenage Mutant Ninja Turtles increasingly emphasized Nintendo Hard Boss Battles that doomed the player regardless of of their skill. While attending college at Virgina Polytechnic, he became hooked on Pinball games like Taxi, Bad Cats, Vegas, and Whirlwind, honing his skills to play for hours on a single quarter. Even after graduating and working as a computer programmer, he remained active in the online pinball community as "Sigma", posting frequently to the USENT rec.games.pinball newsgroup and maintaining the Pinball Archive database.

During the 1997 Pinball Expo, Johnson met Larry DeMar, and was offered a possible opening with Williams Electronics in developing slot machine reels. A few months later, Keith accepted the offer and moved to Chicago, where he worked on slot machines for a few months, then joined the Revenge from Mars team. When Williams exited the arcade industry soon afterward, Keith took a few weeks off, then started working at Stern Pinball in December 1999.

At Stern, Keith quickly proved his worth in pinball programming; his early games like Striker Xtreme and Austin Powers were fairly conventional, but The Simpsons Pinball Party became his Breakthrough Hit, with a ruleset of unprecedented depth and complexity that left pinheads amazed at the amount of features and strategy available. He followed that up with titles like The Lord of the Rings, World Poker Tour, and Family Guy, attracting legions of home-use players who relish the idea of taking years to figure out all of the possibilities in his rulesets. After a few years working with Play Mechanix on arcade game networking, Keith joined Jersey Jack Pinball, creating the controller system and game rules for their debut table, The Wizard of Oz.

Keith's desire for complex rules comes from his desire to play similar games, with there always being something new for a player to strive for. He is particularly fond of integration, of using fun and interesting rules to couple the game to the license or theme, and not "just a game with some lunchbox artwork." He recognizes that not everyone is into complex games, but is confident that fans will eventually embrace the designer's vision. He also has an encyclopedic knowledge of solid-state pinballs, having played nearly every game from 1989 and afterward, and analyzes their rules to learn from and refine them.

Today, Keith lives in South Elgin, Illinois, serving as the Software Manager at Jersey Jack Pinball. He remains active in the pinball community, posting regularly to the Pinside forums,

and is ranked by the Professional & Amateur Pinball Association as among the top 100 players worldwide.

Games programmed or designed by Keith Johnson include: