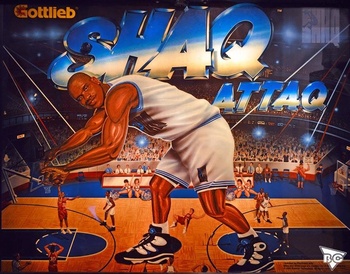 Shaq Attaq is a Licensed Pinball Table from Gottlieb. Designed by Jon Norris and illustrated by Jeanine and Constantino Mitchell, it was released in 1995 under the "Premier" label.

The game puts the player in Shaquille O'Neal's Reeboks, challenging him to complete four qualifying Events and make it to the Finals. Win the Tip-Off, play HORSE, make the Alley-Oop, beat the Shot Clock, and Shatter the Backboard. Use the ramp to launch pinballs into the moving playfield basket, catch the rebounds from the spinning court disc, and collect Game Balls for even more rewards. Start the Shaq Attaq Multiball to rack up the baskets, go Slammin' Jammin' and build up the bonuses, but only the best will be able to uncover all the Hidden Features and prove themselves as MVPs.

Shaq Attaq is often derided by pinball buffs for its unbalanced scoring, lackluster artwork, and annoyingly repetitive callouts. Its fans enjoy it for its varying depth, where casual players can have fun shooting baskets and collecting multiball jackpots, while experts can challenge themselves by going for the harder goals and Hidden Features.