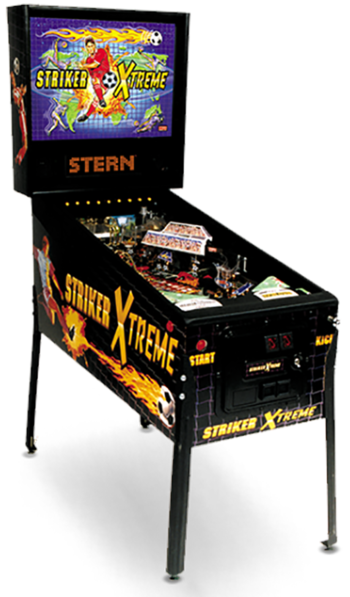 Striker Xtreme is a game based around Association Football; released in 2000, it casts the player as a soccer player who must defeat sixteen teams to win the Cup. Shoot the ball past the rotating goalie at the far end of the field to collect awards, make Free Kicks and Penalty Kicks, then lock balls in the Stadium to start multiball. Make various Combos to collect soccer balls, then collect a mystery award from the Vendor. Defeat all sixteen countries for the championship, then strut your stuff with the Celebration Multiball frenzy.

Striker Xtreme is noteworthy for being the first game designed and produced entirely by Stern Pinball (earlier games were developed under the Sega Pinball brand). Unfortunately, due to various circumstances, it did not catch on and quickly faded into obscurity, and it is rumored that fewer than 500 Striker machines were made.

Undaunted, Stern returned to the game a year later, re-releasing it as NFL and changing it for an American Football audience. Aside from superficial changes to the artwork and sound effects, NFL is the same game as Striker, pitting the player against sixteen other teams to win the Super Bowl. To better appeal to football fans, it was available with nineteen different team translites for the backbox, and the game software could be configured to play graphics and sounds for a specific team. This game was moderately more successful with several thousand sold; finding an NFL machine today is tricky, given that the owners tend to be die-hard fans who hoard them for their game rooms.

The Striker Xtreme and NFL pinballs demonstrate the following tropes: