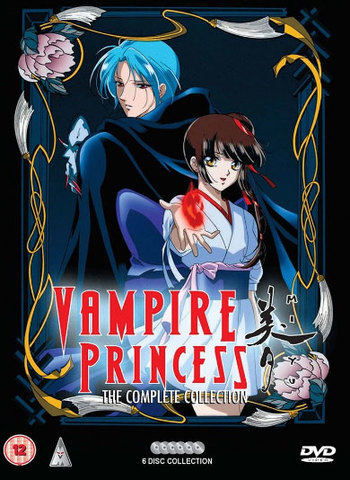 Miyu and Larva
"At one time, gods and demons were as one. They were sealed away in the distant abyss of memories. The hearts of the humans who feared the darkness brought this about. For the present, let's call these beings "Shinma". Now, they have awakened from their slumber, and gathered together. On the final night of that Gathering, when the Dark, the Shinma and the Humans meet, a young girl strayed into their midst. This is her story, and her name is..."
Advertisement:

Vampire Princess Miyu (Kyuuketsuki Miyu) is a Japanese horror manga series by Narumi Kakinouchi and her husband Toshiki Hirano, as well as an anime adaptation by the same creators. The anime was originally presented in a 4-episode OVA (Original Video Animation) in 1988, and was later adapted into a 26 episode television series released in 1997. The furigana for the title indicate the pronunciation as "Vampire Miyu" or "Miyu the Vampire" - the "princess" part of the name comes from the third kanji.

The series as a whole narrate the adventures of Miyu, a vampire who's been appointed as the one in charge of hunting down the Shinma (god demons) who prey on humans and cross the barriers separating the Darkness from the human world. In her hunting missions she's usually assisted by Larva, a masked Shinma whom she once defeated and enslaved...

The OVA has the distinction of being the very first anime to be fansubbed, way back in 1989 by the people that later formed AnimEigo. They later outright licensed the OVA in 1992, and released it to VHS, Laserdisc, and (eventually) DVD, with an English dub produced in 1996. Tokyo Pop first licensed and released the TV series to VHS and DVD beginning in 2001, and it was rescued and reissued by Maiden Japan in 2012. The manga received an incomplete release in the US by Studio IronCat, who disbanded before releasing the whole series.