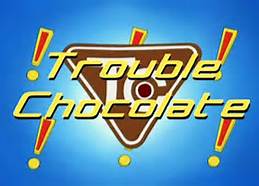 Getting drunk on chocolate never brought so much trouble and exclamation marks!
Advertisement:

Trouble Chocolate is a comedy anime produced by AIC in 1999 and licensed in the United States by Viz Media. The series features Cacao, a student at Micro-Grand Academy studying magic. One day, while his magic class teacher, Ghana, is performing a spell to summon a tree spirit, Cacao finds and eats some chocolate, which turns out to be 200-year-old magical chocolate. After eating the chocolate, he becomes drunk and causes a wreck. During this, he interferes with Ghana's spell, letting the spirit, Hinano, escape. She inhabits the body of a marionette, who then moves in with Cacao.

Subsequent episodes of Trouble Chocolate have little connected storyline. Rather, the show is a parody of other anime. For example, two other characters, Murakata and Deborah, are constantly shown professing their love to each other, set to absurdly explosive special effects and backdrops, as is common (to a lesser extent) in many anime.

The dubbed English dialogue in Trouble Chocolate, written by professional comedy writer Pamela Ribon and recorded by The Ocean Group, often bears little or no resemblance to the original script (as heard in Japanese and seen in the subtitles), as opposed to the normal convention of translating the words as directly as the change in lip-sync will allow.