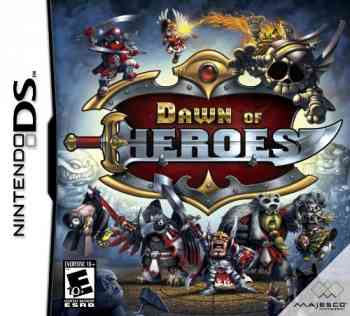 Dawn of Heroes is a Turn-Based Strategy game for the Nintendo DS, developed by Wicked Studios and published by Majesco Entertainment in 2010. On the surface, it's easy to dismiss it as a Final Fantasy Tactics clone, with a 2-D map on the touch screen, rendered in 3-D on the top screen, except that you could only deploy 5 people at a time and the game for the most part prevents all members of one team from focusing attacks or actions on any one target, emphasizing strategy over brute force - most of the time.
Advertisement:

The game follows the journey of Jiro and Reynald, a Khan and a Templar respectively, who take on odd jobs to make ends meet. A routine request to recover a tome from a haunted mansion turns into something bigger - but Jiro isn't concerned about prophecies and being a Chosen One, unlike Reynald. He's more concerned about their employer hiring two magic-users to take the book by force. After prevailing over their would-be assassins, and finding out that the two sorceresses had been duped out of their pay as well, the four of them agree to let bygones be bygones and set off after their ex-employer's trail. And so it begins...

Being a Strategic Roleplaying Game, the following tropes are present: