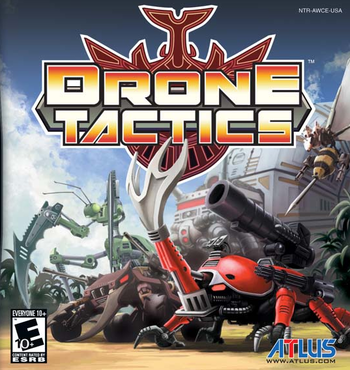 Drone Tactics is a 2008 Turn-Based Strategy game where you play as a bunch of Japanese teenagers straight out of a typical shonen anime. Originally released in Japan by Success as Konchuu Wars (Literally "Insect Wars"), the game was renamed Drone Tactics in Atlus's English version. The game at first appears to be pretty simple and downright easy, but further playing actually reveals quite a bit of depth in the game's designs, particularly the different drones' functions when thinking of a strategy.
Advertisement:

The story is pretty typical: Two young school children named Yamato and Tsubasa find two small insects, a butterfly named Y-Ite and a rhino beetle named K-Buto. The insects came from a planet called Cimexus and were looking for human allies to save their home world from an impeding threat called the Black Swarm. The two children agree to help and head to Cimexus to fight the Black Swarm.

Along with superior graphics in terms of handheld games, this game also features high customizability of the Drones (the giant mechanized insects) you get to use, as well as decent music, passable gameplay and good difficulty (well, in the Badlands anyway).

But the main lure for this game is the sole fact that it lets you control teams of GIANT MECHA INSECTS!!