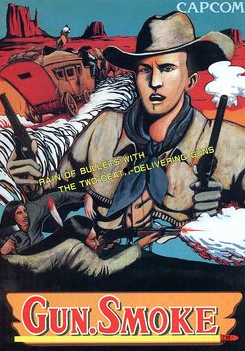 Gun.Smoke (not to be confused with the Western radio and TV series) is a vertically-scrolling Shoot 'Em Up, developed by Capcom and originally released as an Arcade Game in 1985. It was later ported to the Nintendo Entertainment System and numerous contemporary 8-bit computer gaming systems.
Advertisement:

Unlike most shoot'em-ups at that time, players control a gunman walking on feet and move between the grounds. He can shoot diagonally when the players move him sideways.

A family of outlaws known as the Wingates stroll into a peaceful frontier town and kill its sheriff, plunging it into lawlessness and making it easy prey for bandit raids. It's left to a lone gunman to fight back against the Wingates and restore order.

For games with similar concepts, see Sunset Riders and Guwange.