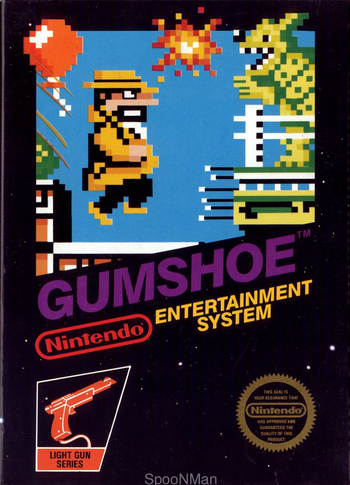 Gumshoe is a side-scrolling/Light Gun Game for the Nintendo Entertainment System.

R.L. Stevenson is an FBI agent-turned-private eye whose daughter Jennifer has been kidnapped by the gangster King Dom, who demands you bring him the five Black Panther Diamonds in exchange for her life. You must navigate Stevenson through each stage of the game by using your Zapper light gun to shoot Stevenson, which makes him jump, and shoot down any obstacles and enemies in his way, from wild animals to glass bottles.

No connection to the tabletop roleplaying game of the same name.