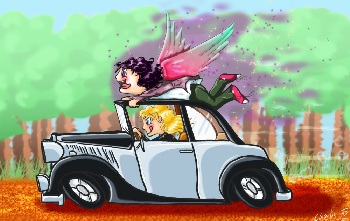 Michael and Uriel are an epic demon-fighting duo! Pic by LJ-user amcw177
Advertisement:

by JAMoczo is the Sequel to Manchester Lost. It picks up several years afterwards, when humans regain memories of the two apocalypses almost happening to them. This leads to humanity declaring war on both Heaven and Hell. As a result, Above and Below have to join forces against mankind.

The story is as big in the Lampshade Hanging and Self-Parody department as the previous installment and very much worth a read if you enjoyed its prequel.

Warning: Spoilers for the prequel will be unmarked, since this a sequel.