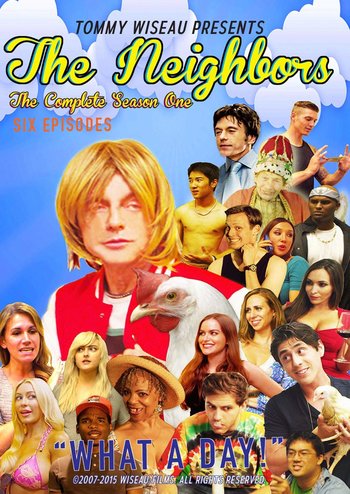 The Neighbors is a series about an apartment building filled with various eccentric tenants. Sounds like standard sitcom fare... until you realize that it's written by, directed by, and starring Tommy Wiseau, the same man behind the infamously bad film The Room. Many of its hallmarks can be seen in the series, including awkward dialogue, stilted acting, and scenes that go absolutely nowhere. Add to that terrible sound quality, even lower production standards, and multiple instances of what seem to be either improvised lines or outtakes that were left in, it ends up being one of the more surreal experiences this side of Tim & Eric—and it's hard to tell how much of that is intentional.
Advertisement:

The pilot was shown along with The Room in late 2014, and the series premiered on Hulu in March of 2015. Not to be confused with the 2012 sci-fi series, the Australian soap opera Neighbours, several films with a similar title, or the short-lived 70s game show hosted by Regis Philbin.