Literature / The Mayor of Casterbridge 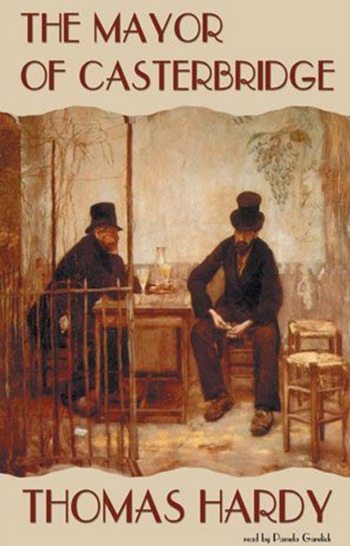 "For my part I don't see why men who have got wives, and don't want 'em, shouldn't get rid of 'em as these gipsy fellows do their old horses."
—Michael Henchard
Advertisement:

Some time in the early 19th century, Michael Henchard, a 21-year-old journeyman hay-trusser, is wandering the Wessex countryside with his wife Susan and their infant daughter Elizabeth-Jane in search of work when he arrives in the village of Weydon-Priorsnote  Fictional counterpart of Weyhill in Hampshire. during the town fair. Henchard proceeds to get drunk on rum-laced furmity and, in the novel's most famous scene, finally carries out his long-made threat to auction off his wife and daughter so that they are no longer a burden to him; the winning (and only) bid of five guineas is made by sailor Richard Newson. The next morning, Henchard is horrified at the realisation of what he has done, and, unable to track down Newson and "his" family, he swears off alcohol for the next twenty-one years.

Some eighteen years later, Susan has received word that Newson has been lost at sea. With nowhere else to turn, she takes Elizabeth-Jane and goes looking for Henchard, and is surprised to find that his years of sobriety have allowed him to become a reasonably successful grain merchant who is serving a term as mayor of the town of Casterbridge. Still ashamed of how he treated her (the particulars of which he has kept carefully hidden to preserve his respect in the community), Henchard is delighted to welcome her and Elizabeth-Jane back into his life, and renews their marriage after a suitable courtship and engagement period. At the same time, he meets Donald Farfrae, a young man from Edinburgh who is planning to seek his fortune in North America, but who knows enough about the latest scientific and technological developments in the grain industry to advise Henchard on how to deal with the poor quality of his wheat after a recent harvest. Lacking much formal education of his own and liking the young man's energy and enthusiasm, Henchard persuades Farfrae to stay in Wessex and serve as his business manager.

But this being Hardy, it's all downhill from there; drunk or sober, Henchard is still a proud and short-tempered man, and he soon fires Farfrae in a fit of jealous anger at his growing popularity, resulting in the Scotsman setting up his own grain business. Then there's the little matter of Lucette La Sueur AKA Lucetta Templeman, a young lady with whom Henchard had a dalliance on the island of Jersey some years earlier when he thought he might be a widower and whom he promised to marry to restore her reputation. And when Susan is taken ill and dies, Henchard discovers a shocking secret about Elizabeth-Jane...

The novel has been adapted for British television twice, for The BBC in 1978 produced by Dennis Potter and starring Alan Bates as Henchard,note  This adaptation is notable for being the first British TV drama to be shot entirely on videotape, with a then-new model of portable video camera used for location shooting. and for ITV in 2003 produced by Georgina Lowe and starring Ciarán Hinds as Henchard. It was also given a Setting Update in the 2000 film The Claim, set during the Gold Rush in California, directed by Michael Winterbottom and starring Sarah Polley as Elizabeth-Jane (called Hope here), Milla Jovovich as the Lucette figure (called Lucia), Wes Bentley in the Farfae role (Daglish here), and Peter Mullan in the Henchard role (Dillon here).

This novel features examples of the following tropes: