La Celestina or ''The tragicomedy of Calixto and Melibea and the old prostitute Celestina'' is a Spanish book written in 1499 by the converse jewish writer Fernando de Rojas. 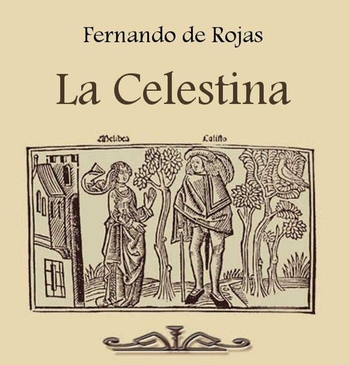 The plot starts with Calixto being rejected by Melibea. Calixto then turns into an Emo Teen, until his servant, Sempronio, presents him to The Matchmaker Celestina, who offers him Melibea's love. She uses her knowledge of human behaviour and sorcery to acomplish her goal. Soon after getting her payment from Calixto, Celestina is murdered by Calixto's servants, Sempronio and Parmeno, who wanted their part of the payment but didn't get it. Sempronio and Parmeno are caught by the local justice and executed on the spot.

Once together, Calixto and Melibea enjoy their love secretly without knowing that there's a plot against them by two prostitutes, Elicia and Areusa, who blame them for the death of Sempronio and Parmeno. Two thugs, Centurio and Traso, are hired by Elicia and Areusa to murder Calixto during one of his nocturne dates with Melibea, but what actually causes Calixto's death is slipping off a ladder and falling head first to the ground when he hurries to help his servants. After discovering his death, Melibea commits suicide. The work ends with Melibea's father, Pleberio, crying for the death of his daughter.

The book is considered one of the best novels ever written in the Spanish language, and it's a staple in any Spanish literature class. It was also a big hit, specially the character of Celestina, who is considered one of the best characters ever created in Spanish literature, and her name is nowadays an official synonymous of "matchmaker" in the Spanish language. As in, her name literally appears in the dictionary.