Literature / Chronicle of a Death Foretold 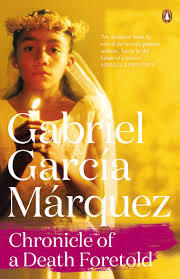 Chronicle of a Death Foretold is a 1981 novella written by Colombian author Gabriel García Márquez (of One Hundred Years of Solitude fame) that tells the story of a man named Santiago Nasar who was brutally murdered by twin brothers named Pablo and Pedro Vicario the day after their sister Angela's wedding. The narrator tries to find out the reason behind the murder and the sequence of actions that lead to it.

Since the death itself is hinted in the title, there will be spoilers ahead.

This work shows examples of the following tropes: