Theatre / How to Succeed in Business Without Really Trying 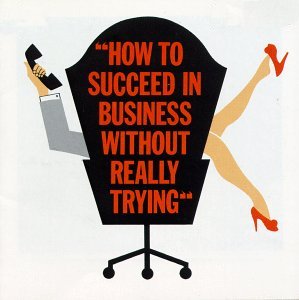 A bit of musical theatre written by Abe Burrows, with music and lyrics by Frank Loesser, which was first staged in 1961. It's based on a book by Shepherd Mead, which had the subtitle "The Dastard's Guide to Fame and Fortune." The show takes a similar tone.

The story starts out with a kid named J. Pierrepont Finch, a window-washer at the World Wide Wicket company (no, that's not a Stealth Pun, this was The '60s). He's reading from the eponymous book, quotes from which are often provided by a disembodied Narrator. After a Crash-Into Hello with the president of the company, Finch gets a proper job. Now, with only advice from the book, Indy Ploys, and a Twinkle Smile to aid him, Finch must work his way up the corporate ladder, with the help and/or opposition of (amongst others): Bud Frump, nephew of WWW current president J.B. Biggley; Femme Fatale Hedy LaRue, who is having an affair with Biggley but causes instant attraction from just about any male character; Rosemary Pilkington, his Love Interest; and his own plans and schemes, which have a tendency to Go Horribly Right.

The Film of the Play, directed by David Swift and starring Robert Morse, Michele Lee, Rudy Vallee, and Sammy Smith (reprising their respective roles of Finch, Rosemary, Mr. Biggly, and Mr. Twimble / Wally Whomper from the Broadway original) came out in 1967. The show was revived on Broadway in '95 with Matthew Broderick as Finch and Walter Cronkite reading the book, for which Broderick won a Lead Actor Tony. Its 50th-anniversary revival in 2011 starred Daniel Radcliffe of Harry Potter fame. In what may be a Casting Gag, Radcliffe was replaced by Darren Criss (who also played Harry Potter in A Very Potter Musical), in January 2012 for a two-week run, to be replaced again by Nick Jonas.

This musical contains examples of the following:

Alternative Title(s): How To Succeed In Business Without Really Trying