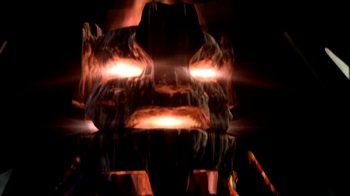 First Ones seem to have an over-developed sense of the dramatic.

Delenn tells me that you are going to try contacting the First Ones. It is a magnificent idea. A daring, and splendid idea. In doing so you will see things no human has seen before. It will be fun. Assuming you are not vaporised, dissected, or otherwise killed in an assortment of supremely horrible and painful ways. Exciting, isn't it?
—Draal

Garibaldi and Zack are walking together when Garibaldi is suddenly called with a Code 7-R, a meeting of the War Council, much to Zack's confusion. There Delenn explains that gaining the proper allies may make the difference in the coming war. With that in mind, she's enlisted Draal's help in locating the few remaining First Ones. Draal invites Sheridan down to the Great Machine later to conduct the search.

Meanwhile, a beautiful blonde, Julia Musante, arrives on station and goes to meet with the captain, while G'Kar finds Delenn and attempts to find out what she knows about rangers. Delenn quickly says she doesn't know anything, and G'Kar lets her go, promising to keep looking.

Sheridan arrives in his office to find Musante already there. She explains that she has been sent by the Ministry of Peace, Nightwatch, as his Political Officer. His recent decisions have caused some waves back home and she's there to make certain he doesn't do anything too inconvenient in the future. Sheridan is not happy and protests her presence but her orders come from further up. She suggests they have dinner that evening to get to know each other better. Sheridan tries to say he has plans, but can't say what they are without telling her about Draal, so he relents and agrees to dinner.

With the whole of the Earth bureaucracy now sitting on his shoulders, Sheridan can't make it to Epsilon III and sends Ivanova in his place. She'll work with Draal while he keeps Musante entertained/distracted. Ivanova asks if there's anything else.

Sheridan: Glass of whiskey, a gun and two bullets.

Zack shows Musante to her quarters, asking how things went with the captain. She thinks he'll come around eventually, but wants Zack to fill her in on the things Sheridan doesn't tell her...just until he does, of course.

At dinner Sheridan expresses his concerns that the Centauri will continue moving into the League of Non-Aligned Worlds until someone stands up to them, but Musante dismisses them.

Musante: Earth would never ally itself with a government that's bent on war.
Sheridan: Well, we have signed a treaty with the Centauri.
Musante: Exactly, which proves my point.

When she asks how things are on the station, Sheridan brings up some problems with the Lurkers, their version of the homeless. He tries to explain how they have many of the same problems that Earth does, but she says Earth doesn't have homeless...or poverty or crime or prejudice. According to her President Clark has all but solved the world's problems, which amounts to redefining them or pretending they don't exist. Sheridan finds this disturbing.

While Draal is initially irritated at Ivanova coming rather than Sheridan, she quickly endears herself to him, and he takes her to the heart of the Great Machine. He lets her use it in his place for a while to search for the First Ones. She finds evidence of them on Sigma-957, but she's not alone. The enemy is nearby as well, and nearly catches her. Then she sees something else: Earth Force One before it exploded, and then she sees Clark talking to someone (Morden) about how Earth Force One will never return from Io and how the power is now his. Ivanova collapses from the machine and asks Draal to get a recording of that. It's the proof they need.

Sheridan has brought Musante to his quarters, hers apparently accidentally, suspiciously, locked. As she makes herself comfortable, he pours some drinks, but when he turns around he finds that she seemed to think her dress was uncomfortable. Faced with a naked woman in his quarters, the only thing that could make it worse is someone barging in on them, so naturally that's when Ivanova decides to use Draal's hologram to try and talk to him. Sheridan grabs Musante and kisses her to keep her from noticing, then glares at Ivanova over her shoulder. After breaking the kiss, he goes to his room, and finds her there.

She tells him what she found, but Sheridan can't do anything right now, not with Musante keeping such a close watch on him. He orders her to go make contact. Her image vanishes moments before Musante comes looking for him. Glancing down at her, he notes it must be colder than he thought and goes to fix it, while she pouts in disappointment.

G'Kar is still hunting information, this time from Garibaldi, who won't say anything, much to the Narn's frustration. Garibaldi apologizes, but he just doesn't know anything that could help him. G'Kar suddenly suggests that there might be something he can do to help Garibaldi and rushes off.

Zack finds Musante in the morning, who tells him to come to a meeting of the Nightwatch later. There she makes several announcements about their new scope of authority, forbidding Earthforce personnel from criticizing the government, and investigating past associations. Zack seems uncomfortable with all this.

Ivanova, assisted by Marcus, takes the White Star to Sigma-957, where they encounter a large and strangely proportioned craft. A totem-like figure appears on their bridge and Ivanova explains their purpose, though they seem to get testy when the Vorlons are mentioned. The figure vanishes, but they don't leave, which Marcus take as them thinking it over.

Back on the station, Sheridan views the recording Ivanova got. They need to get it out, so he orders Garibaldi to get it to General Hague. He'll be able to release it without letting it be traced back to him.

Meanwhile the First Ones come to a decision: Zog.

Ivanova: Zog what? Zog yes, zog no?
Marcus: They're leaving; I guess zog means no.
Ivanova: Like hell.

They quickly brainstorm ideas to make them stop, to which Marcus sarcastically suggests putting a bucket on his head and pretending to be the ancient Vorlon god Booji. Ivanova gets an idea and opens a channel to the First Ones, thanking them for their time and then saying they really didn't need them anyway. After all, they have the Vorlons already, and they're already pretty much perfect. She concludes by promising to come let them know when they can come out of hiding.

"When it is time, come to this place. Call our name. We will be here."

With that, the ship turns and vanishes.

Sometime later, the news of the transmission breaks and Musante is called back to Earth to help deal with the fallout. Before she goes, Zack asks her if she's heard of a Code 7-R. She hasn't; why did he ask? No reason, he replies, but now he's wondering what Garibaldi is hiding from him.

Garibaldi is asleep that night when G'Kar comes and delivers him the Book of G'Quan. He protests that he doesn't read Narn but G'Kar tells him to learn. Garibaldi just grumbles as he stumbles back to bed.

Garibaldi: He hates me. They all hate me. That's why they do this; to drive me crazy!

Sheridan: And when exactly did all this happen?
Musante: When we rewrote the dictionary.
Draal, it knows I'm here... it knows my name!