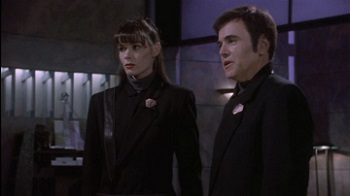 You cannot harm one who has dreamed a dream as I have.
-Jason Ironheart
Advertisement:

In deep space a small transport is being pursued by Earth Alliance squadron Black Omega, but with a sudden flash of light, the fighters vanish, leaving the transport free to dock with Babylon 5. Its pilot, a man named Jason Ironheart, says he's looking forward to his visit.

Aboard the station Jeffrey Sinclair and Catherine Sakai are talking. She is about to receive a contract for another survey, but Jeff is a little worried about it, a fact that amuses her.

Some time later, a pair of Psi Cops, Alfred Bester and his partner Kelsey, telepathic law enforcement officers, arrive on the station. Without saying any spoken words they demand to see Commander Sinclair and are shown to his office.

Catherine has just received her assignment, survey a planet called Sigma-957. There are expected to be large deposits of Quantium-40 there, the material used to construct jumpgates. She agrees to the terms of the contract, but there is one more party who needs to give their consent before she can go. She turns around to see G'Kar behind her.

The Psi Cops arrive in Sinclair's office, who is annoyed when they attempt to thought-speak with him. He insists they talk normally. The Psi Cops say they are on a mission to track down Jason Ironheart, who has run away from the Corps, and has knowledge that could compromise Earth security. Meanwhile, Ironheart is renting a small flat on the station when he has a sudden headache...which causes the entire room to tremble. Back in Sinclair's office the command staff has been assembled, as well as Talia Winters. Ironheart was her instructor at the Psi Corps academy, and Bester and Kelsey want to know if she's been in contact with him. She says she hasn't but they insist on doing a painful deep scan of her mind. Once they have verified she has had no contact they leave, telling them not to approach or speak to him, just find him.

As Talia leaves, Ironheart appears before her, asking her for the chance to explain.

Catherine is talking to G'Kar, who, while he has given his his consent, is advising her not to go. He says it it not a healthy place, that strange things happen there, and other things that Catherine takes as a threat. She threatens to go over his head then heads off to prepare for her flight. G'Kar later requests a heavily-armed fighter be sent to Sigma-957.

Ironheart has brought Talia to his flat and is explaining that he volunteered for a project to attempt to increase his telepathic abilities. He was subject to numerous and painful treatments until one day he found his powers had expanded beyond anything they ever dreamed possible. He had become quite possibly the single most powerful telepath in the galaxy, and it was then that he discovered what the project was really for. They were trying to create a stable telekinetic, not for large things, like telekinetic shielding as he thought, but small things, the smaller the better, for example a assassin that could literally shut off parts of the target's body without leaving a trace. Talia is horrified by the implications, but before they can continue, Ironheart has another of his episodes which shakes the entire section and throws up some kind of telekinetic field around the area.

An irate Sinclair berates the Psi Cops for withholding vital information and thus endangering the station. He demands the entire truth this time, and Bester reluctantly tells him. They were under orders to keep it quiet in case alien governments find out about the project. They also have a telepathic code they can send to put him to sleep, but they need line of sight to send it.

Talia approaches the barrier, asking to be let in, which he does. He admits he came to the station to see her, and that he has learned more about the Corps than they would like. Psi Corps is slowly starting to take over behind the scenes. He also tells her that one final change is coming for him.

Later, Talia finds Sinclair and asks him to come with her. She explains what she knows and tells him about her history with Ironheart. They were lovers.

At Sigma-957, Catherine's up-to-now routine survey is interrupted when an immense ship of alien design appears and flies across her path, then vanishing into some kind of fold in space. Her computer cannot identify it, but her power levels are dropping and she is beginning to lose her orbit.

As Sinclair arrives in Ironheart's room, he tells the commander that Psi Corps is about one thing: control, and that was the ultimate motive for this project, but it went further than they ever thought possible. He now has the ability to manipulate energy, giving him control over smaller and smaller particles. He needs to get away, for if the Corps manage to catch him they'll take him back and try to find out what caused it. At length, Sinclair agrees to help him escape.

As Catherine's ship begins to enter the planet's atmosphere, the Narn fighters G'Kar requested arrive and move to lend assistance.

Garibaldi arranges for one of the main corridors to be cleared, but one of the security guards is confronted by the Psi Cops and they are able to read his thoughts and figure out that they will be moving Ironheart. They confront them in the corridor, and their attempts to send the code distract him, allowing his powers to get away from him. Eventually, he vaporizes Kelsey with his mind, and knocks Bester out by flinging him across the hall. They finally get him to his ship and send him out, but as it floats in space another flash of light is seen and the fully realized being that used to be Jason Ironheart appears. He gives Talia a gift before disappearing into the cosmos.

As Bester and Sinclair view the visual record, he comments that his superiors will not believe any of it, especially since Sinclair is going to arrange for the record to be deleted. He suggests that they reports something close to the truth, Ironheart attempted to escape, but his ship exploded before he reached the jumpgate. Also that Talia was not acting of her own accord. If he doesn't Sinclair's report will say how Bester's interference endangered the station, and led to Kelsey's death.

In her quarters, Talia is testing her gift: moving a penny with her mind.

Now returned, Catherine asks G'Kar why, and he responds, "Why not?" Her death would only distress the commander, which is not to G'Kar's benefit, so, why not? She then asks what it was she encountered, he answers by picking up an ant and asking if an ant would have any more idea what he was.

"There are things in the universe billions of years older than either of our races. They are vast, timeless ... They are a mystery, and I am both terrified and reassured to know that there are still wonders in the universe— that we have not yet explained everything. Whatever they are, Ms. Sakai, they walk near Sigma-957. They must walk there alone."