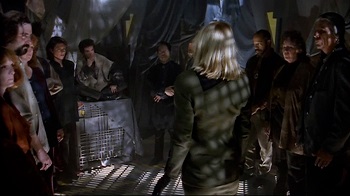 A Race Through Dark Places

The Corps got started because we were afraid of telepaths, and now we're victims of our own fears. We took away every right they had and shoved them into a big black box called Psi Corps. Now, look at them. Black uniforms, jack boots, giving orders... Some days they scare the hell out of me.
—Michael Garibaldi
Advertisement:

Sheridan and Ivanova are going over the station's budget, which is slimmer than usual, and because of that, Earth Central wants them both to either move to smaller quarters or start paying rent. Sheridan makes it quite clear what he thinks of that: "You tell those bean counters that they can go to hell!"

On Mars, Psi Cop Bester is interrogating a man strapped to a chair. He's trying to find information about an underground railroad smuggling telepaths off of Earth. The man starts to sing "Mary Had a Little Lamb" to keep himself from thinking of it, but Bester is able to snag what he needs moments before the man dies. The railroad is being routed through Babylon 5.

Sheridan is talking about his housing situation with Franklin, who thinks he's doomed, when Delenn comes up with an idea to help her understand human culture better. She suggests dinner, one where they don't have to worry about business. Sheridan is caught a bit off guard, but agrees to it.

Bester arrives on station and meets with the command staff. He informs them of the underground railroad and demands their cooperation. Sheridan wants to discuss it with his staff first, and Bester leaves. Garibaldi doesn't like it, but he points out that they do have an obligation to uphold the law, and orders Garibaldi to assist him. Ivanova doesn't protest, but she recommends Sheridan check the files on what happened last time Bester was here.

As Bester walks with Talia in the Zocalo, he suddenly hears a voice say, "Murderer!" in his mind. This confirms his suspicions; they're here. In Downbelow, a rogue telepath informs a group of them of Bester's presence. They know he will try to stop them and if he does, they will have no option but to kill him.

That evening, Delenn arrives at the Fresh Air Restaurant, in an attractive black dress. Sheridan is obviously surprised by her appearance, but pulls a chair out for her to sit in. A nearby patron leans over, trying to peek at Delenn's cleavage, which leaves her somewhat bemused. Once Sheridan takes his seat they examine the menu together.

Garibaldi talks to Ivanova looking for information on the underground railroad, but he's got the wrong person. Ivanova has no love for the Corps, but she's not smuggling telepaths away from them either. She gets up to leave but Garibaldi has one more thing he wants to talk to her about.

Dinner is over and Sheridan and Delenn are just talking about cats. Sheridan is surprised to see her laughing and she begins to explain the role of humor in Minbari culture, prompting him to share some similar customs from Earth. She observes that they have more in common than they thought.

As he returns to his quarters afterward, he finds them locked, and his card isn't working. Ivanova comes up and tells him that Earth Central has locked them out until they pay rent. He refuses but that means they have nowhere to sleep. He decides they'll crash in his office, and tries to lighten the mood by telling jokes, much to Ivanova's annoyance.

Meanwhile the telepaths prepare for a confrontation.

The next morning, Bester has invited Talia to have breakfast with him when he suddenly hears voices in his head again moments before the rogues attack. They miss Bester but Talia is kidnapped. She awakens to find herself surrounded by the renegades. She asks why they're doing this, saying the Corps is trying to protect them. Their leader, Rick, steps forward and tells her it's not true, and they're going to show it to her. He was in the same project as Jason Ironheart and ran away for the same reasons.

Dr. Franklin comes to Sheridan with a message. Talia is okay, and the leader of the underground railroad wants to meet with him, but he has to come alone.

Talia listens to telepaths tell their stories, one about his brother who took the sleepers to suppress his talent but kept speaking out against the Corps, until one day he never woke up after his treatment. A woman tells how she was told to marry another telepath but refused. One night she felt like she was taken somewhere in the middle of the night, and a few weeks later she found she was pregnant. The baby was taken from her and she ran as soon as she could walk. Rick talks to her again, asking her for her help.

Sheridan arrives at the meeting place and is surprised to find Franklin there. When Sheridan expresses concern that he might scare off the leader, the doctor replies that he is the leader. As the telepaths appear, Sheridan angrily demands an explanation. Talia appears and says he does have a good reason. Franklin begins to tell of stories he began to hear on Earth, of atrocities the Corps was committing. He and a group of doctors began moving telepaths around but eventually they had to get them away from Earth and out to the colonies.

Sheridan sympathizes but he is now in a very awkward position. If he goes public, it'll do tremendous damage to the station's reputation, and if he stays silent, he's an accomplice. Talia says there's another way.

Sometime later Bester arrives and finds Talia with the renegades. He asks them to come back, promising they won't be harmed. Talia counters by saying they would be killed as an example to the rest. She and the others join hands to meld their powers. It doesn't work, however, and Rick suddenly realizes Talia is blocking them. As the chain breaks, Bester opens fire. Talia grabs a gun and the two of them kill all of the renegades. He complements her on her loyalty then leaves.

After he's gone, Sheridan and Franklin emerge from around a corner, and go over to where they are all standing, still holding hands. He asks what happened; Bester came in, stood there for a while, then smiled and went back the way he came. Talia explains that none of them would be able to stand up to Bester alone, but together they were able to worm past his defenses and make him see what they wanted him to see. Bester will not press the issue since he doesn't want to be connected to a bunch of dead bodies.

Franklin assures Sheridan that the underground railroad will move now to avoid scrutiny. Sheridan agrees and allows them to go, then he and Franklin head back up.

Before Talia leaves, Rick talks to her one more time. He's concerned that Bester will realize the truth if she talks to him, but she thinks she can keep him out, one of Ironheart's gifts. Later, as she sees Bester off, there is a moment where he seems to suspect something is off, but does not do anything about it.

Ivanova arrives in Sheridan's office, pillow in hand, ready to weather another night, but he tells her she can sleep in her own quarters. She asks if Earth Central gave in; no, they didn't. So she asks if Sheridan gave in; not exactly. He rerouted credits from the combat readiness budget to pay the rent, "On the grounds that I'm not ready to fight anybody until I've had a decent night's sleep in my own damn bed."

Ivanova is delighted to sleep in her own bed, but before she can get to sleep, the door chime rings. Talia comes in with some drinks. She wants to talk, and Ivanova lets her, after making her take off the Psi Corps badge.