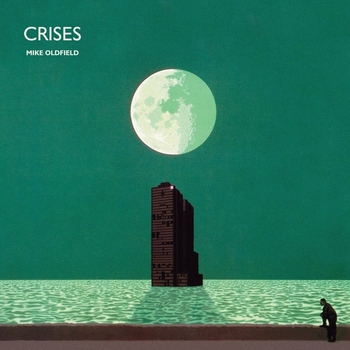 "See you in heaven one day."
Crises, crises — You can't get away!
Advertisement:

Crises is the eighth studio album by English Progressive Rock musician Mike Oldfield, released through Virgin Records on 27 May 1983. Continuing the shift to more accessible music that had started with Platinum in 1979, the album began recording while Oldfield was finishing up the tour for his previous album, Five Miles Out. Similarly to that album, this one marks an attempt to bridge the gap between the longform compositions that he preferred (and that made him famous) and more radio-friendly material that could more easily succeed on the charts. Consequently, the album splits itself between a side-long title suite in the vein of his 70's albums and a side filled with pop rock songs that could be viably released as singles, making additional use of guest singers such as Maggie Reilly and Jon Anderson who Oldfield had previously collaborated with. At the same time, the album sees Oldfield experiment with Heavy Metal, a genre he had started to grow fond of during this time, with pieces like "Shadow on the Wall" featuring a harder sound previously thought uncharacteristic compared to the more atmospheric direction of his prior work.

The final result was more successful than he anticipated. Not only was the album itself a considerable commercial success, peaking at No. 6 on the UK Albums chart and topping the charts in Germany, Norway, and Sweden, but lead single "Moonlight Shadow" would top the charts in nine different countries in Europenote specifically Austria, Belgium, Ireland, Italy, the Netherlands, Norway, Spain, Sweden, and Switzerland as well as topping the Eurochart Hot 100, going on to become the best-selling single of 1983 in Austria and Oldfield's biggest-selling single in his entire career. The album itself would later be certified platinum in both Germany and Spain as well as gold in the UK, France, and the Netherlands.

Crises was supported by two singles: "Moonlight Shadow" and "Shadow on the Wall". "In High Places" would later get a single release in 1987 to promote Virgin CEO Richard Branson's launch of the (now-former) world's largest hot air balloon that year. The non-album single "Mistake", released before "Moonlight Shadow", would also be added to the initial US release of the album.

The tropes, so close we touch them: